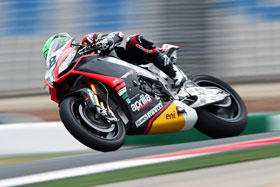 The World Superbike series only ended its season a few weeks ago, but riders and teams are already looking ahead to 2014 - and making some major changes in preparation for next year. Some of the biggest news surrounds a new signing for the Suzuki factory team, which has inked top rider Eugene Laverty for 2014.

Laverty, who finished as the runner-up to Tom Sykes in this past motorsports season, is coming off a year in which he had nine wins and 19 podium finishes. All of that was accomplished on the Aprilia RSV4, but Suzuki hopes he will be able to replicate his success on the Suzuki GSX-R1000.

"I am delighted to join Crescent Suzuki for the 2014 season," Laverty said. "I will try the GSX-R1000 for the first time at the end of this month to better understand our potential, and I am really excited to see what I can do with the bike. ... I will give everything I possibly can to bring Suzuki to the top of the podium again."

Suzuki hasn't won a World Superbike race since 2010, so Laverty may have his work cut out for him. However, with so many changes happening throughout the sport bike series - including the Aprilia team he just left - there are certainly opportunities to make a splash in 2014.