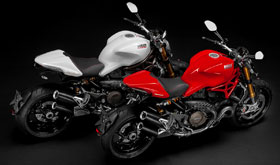 The 2013 EICMA show has finally come to a close, but not before the 2014 Ducati Monster 1200S was named the "Most Beautiful Bike of Show." This is welcome news for Ducati, as the Monster 1200S still remains appealing after 20 years of production, nearly 275,000 models sold and countless motorcycle accessories offered.

Visitors to the celebration cast their votes for the show's most appealing motorcycle. The 2014 Ducati Monster 1200S was the top pick, followed by the MV Agusta 800 Turismo Veloce, the Aprilia RSV4 Factory ABS, the BMW R nineT and the Kawasaki Z1000. More than 10,000 people cast their ballots to determine the winner, IOL Motoring reported.

Although it is widely considered to be one of the premier bikes on the market, the Monster 1200S recently underwent a redesign and now features a motorsports-inspired engine and new chassis, among other upgrades.

This isn't the first time Ducati has taken home the award. In fact, since the recognition began in 2005, either Ducati or its fellow Italian manufacturer MV Agusta have earned the prize. According to Motorcycle.com, this may be because the show takes place in Milan, and there was a natural bias toward the European producers, but both brands are known for making some impressive bikes.