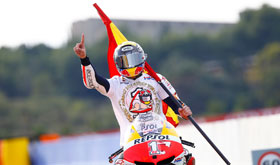 With a third-place finish at the Valencia Grand Prix, Marc Marquez did enough to clinch the MotoGP championship. The 20-year-old is the youngest champion in the history of the motorsports series and the first rookie to win a title since 1978.

The lone challenger heading into the race was Jorge Lorenzo. Lorenzo, last year's MotoGP champion, was just 13 points behind Marquez at the start of the weekend, and the Honda rider had to finish fourth or better to clinch the overall victory. He chose to play it safe for most of the event and eventually crossed the finish line in third behind Lorenzo and teammate Dani Pedrosa to claim the title.

In the end, Marquez was four points ahead of Lorenzo - one of the smallest margins of victory in the history of the sport and the smallest since 1992, according to BBC Sport.

"I cannot explain how I feel," Marquez told BBC Sport. "This is a dream come true - maybe too early because I did not expect to fight for the championship this season. Jorge Lorenzo did a great job, but thanks to all my team."

Marquez is also only the fourth rider in the history of grand prix racing to win championships in three different categories: the 125 cc class, Moto2 and MotoGP.