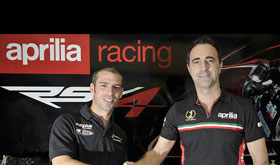 When BMW announced that it was ended its relationship with World Superbike, it left many fans - and a few riders - without a team. At least one affected individual has remedied that problem, as former BMW rider Marco Melandri has signed on to compete with Aprilia next season. The Italian will ride the RSV4 in 2014.

This isn't Melandri's first time riding an Aprilia. He began his motorsports career with the team more than a decade ago and saw success right away. Melandri placed fifth in World Superbike in 2000, when he was just 18 years old, before improving to third place in 2001. He was crowned the World Champion in 2002 after racking up nine wins in 16 races.

Now that he is back with the Italian brand, he will look to recapture some of this glory.

"Coming back to ride the brand that brought me my first World Champion title is - first and foremost - very exciting," Melandri said in a statement. "Speaking from a human and personal point of view, there are so many memories that tie me to Aprilia, and they are memories of victories."

Aprilia is coming off several years of prolonged success, including a 2013 Manufacturer Title and a 2012 individual championship with the now retired Max Biaggi.