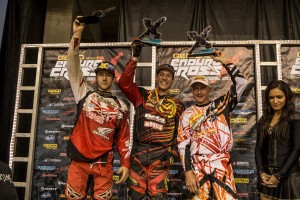 The chase for the 2013 GEICO AMA EnduroCross series, fueled by Monster Energy and presented by Lucas Oil visited a sold out Comcast Arena in Everett Washington and Beta's Cody Webb took a thrilling win to move into a tie for third in points. Webb passed KTM's Mike Brown for the lead on lap ten of twelve to take the win. Brown had to hold off Rockstar/Lucas Oil backed Colton Haaker to take second in the dirt bike race. Taddy Blazusiak salvaged fourth place despite two crashes in the main and a nasty crash during the first practice that injured his right wrist. Husqvarna's Cory Graffunder rode a strong race to take fifth.

Kyle Redmond, Brown and Blazusiak won the three heat races, which all included exciting battles. The thirteen riders that qualified for the main via the heats and LCQ's each completed a single Hot Lap against the clock to determine the gate picks. Webb set the fastest time to get the first pick ahead of Monster Kawasaki's Taylor Robert, Blazusiak, Haaker and Redmond. Brown had a near crash into the pond, which contributed to him earning the ninth pick and a less desirable outside pick.

Despite the outside gate pick, Brown came out of the first turn in second behind Robert and then immediately passed him for the lead and then put in a couple of extremely fast laps to open up a big lead. Robert and Webb exchanged second position a few times before Webb finally took the position on lap four and at that point, he was nearly nine seconds behind Brown. Webb put in several consistent laps at the same time that Brown started to suffer from arm pump and cut the lead in half and then closed to his back wheel on lap ten when Brown got stuck in a tricky rock turn. Webb made an aggressive pass on the inside to take the lead and then took the white flag before opening a five second gap on the last lap to take his second consecutive GEICO EnduroCross win. "This track was so difficult and I felt like I was so tired but I know that Brown and Colton must have felt the same way out there" Webb said.

Brown came under heavy pressure from Haaker and the two battled all the way to the checkered flag to take the final two podium positions. "I could not hold on after the halfway point" Brown said. "The ruts and slippery track was difficult but I should have continued to pull away" he continued. Blazusiak, who had suffered a huge crash during the first practice session crashed multiple times during the main event but managed to work back through the field to finish fourth and lose only four points to Brown in the championship chase. 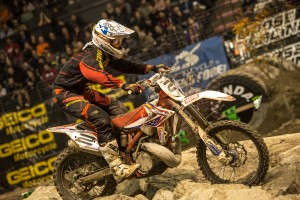 Cody Webb took a thrilling win to move into a tie for third in points - Photo: Drew Ruiz[/caption]

Graffunder completed the first lap in eighth and steadily moved through the field to finish fifth. Robert, who was sick all week faded to sixth despite taking the lead on the start. Redmond finished seventh, Gary Sutherlin was eighth, Geoff Aaron ninth and Justin Soule rounded out the top ten.

Brown gained four points on Blazusiak in the championship chase, 112 to 105. Robert narrowly held onto third with 90 and Webb moved into a tie for fourth with Haaker at 88 points. Two rounds remain with Boise Idaho on November 9th and Las Vegas on November 23rd.

Like most of the races during the evening, the women's main event came down to the last battle and Canada's Chantelle Bykerk took a narrow win over Shelby Turner. The two exchanged the lead a few times and Turner closed Bykerk's rear wheel but came up a little short. Rachel Gutish took over third on the last lap to take that last step on the podium. Bykerk has now won three races in a row and has opened up a large points lead over Gutish, 119 to 97. Morgan Tanke is in third with 75 and Turner is forth with 69.

Each EnduroCross event also includes several amateur classes and Montana's Rob Farrington took the win over Derek Stephen Foord and Ryan Pugh. Harrison Oswald made a last lap pass to take the win in the Open Amateur class ahead of Wyatt Hart and Daniel Brown. In the TrialsCross class, Daniel Blanc-gonnet took the win over Kyle Larsen and Nathan Brown. 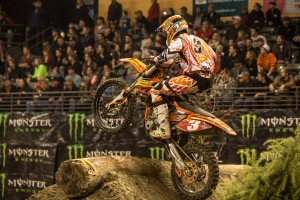 In his heat race, Brown quickly leaped out front to lead all six laps of the heat to easily transfer to the main event. "I wasn't very happy with my hot lap or practice times," mentioned Brown. "I knew I needed to come out swinging and I'm really excited for the main event tonight."

Blazusiak, who set the second-fastest lap in practice, was also able to come out on top in his heat race. The Red Bull KTM rider grabbed the holeshot in the third heat and took the win and first transfer position.

During the hot laps for gate position, Brown had a problem in the water section which caused him to lose some time to end up with 8th gate pick. Meanwhile, Blazusiak laid down an impressive lap to receive 2nd gate pick for the main event.

When the gate dropped it was Brown, from an outside gate, rounding out the first turn in the lead. Each lap Brown continued to stretch his lead to as much as ten seconds at one point. On the tenth lap Brown made a mistake in the rock section, allowing Cody Webb to make up some time. The two riders drag raced down the start straight and into the water obstacle side by side. Unfortunately, Brown took an outside line over a log turn and slid out, allowing Webb to take-over the lead. Brown was able to quickly pick himself up in second. With two laps to go Brown worked hard to get back around the leader, but was couldn't get back around Webb to eventually end the race in 2nd. 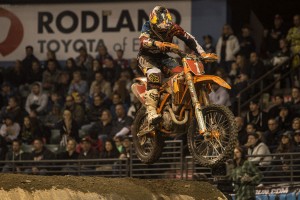 "I started making some mistakes towards the end of the race and was really my worst enemy tonight," mentioned Brown. "I'm still happy to be on the box and gain some points towards the championship."

Meanwhile, Blazusiak had trouble right off the start and came around the first lap in last position. Blazusiak began to work his way through the pack, making an impressive pass through the rock turn to gain three positions. By the halfway point Blazusiak had made his way up to 5th and gaining on the 4th place rider of Colton Haaker. In the meantime, the second place rider of Taylor Robert went down allowing both Blazusiak and Haaker to gain a position. With two laps to go Blazusiak was making up substantial ground on Haaker, but was unable to make a pass. Blazusiak finished the race with a hard fought 4th overall.

With two rounds remaining, Brown holds on the points lead in the championship standings with 112 points. Blazusiak sits behind him in 2nd with 105 points. The riders will have another two week break before heading Boise, Idaho for the sixth round of the series on November 9, 2013.