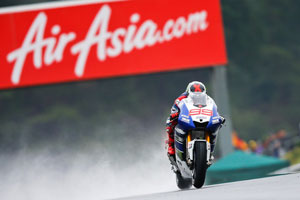 MotoGP brought its action to the Motegi circuit at the Japanese Grand Prix, and the series' top riders did not disappoint. Jorge Lorenzo continued his winning streak with another victory - one that kept his hopes for a championship title alive.

Despite the wet and foggy conditions, Lorenzo managed to put forth a consistent effort and cleanly win the race. Marc Marquez finished second after a strategic mistake cost him a chance to grab the lead, but the rookie rider was happy with the results nonetheless.

"Second place today was a very good result," Marquez said. "... I saw that Jorge was a little stronger than us here and I had a couple of scary moments, making me decide that 20 points and the gap being reduced by only five points would be a decent result. There is only one race remaining - the most important of the year - so we shall try to be more focused than ever at Valencia."

The win puts Lorenzo just 13 points behind Marquez, with only the finale at Valencia remaining. That showdown will take place Nov. 8 to 10 at the Spanish circuit. Marquez needs a fourth-place finish or better to take the title, but anything worse could open the door for Lorenzo to maintain his position as the motorsports champion.