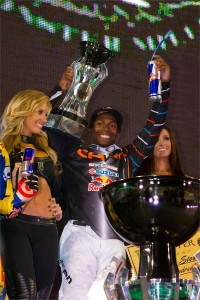 Unique in that the Monster Energy Cup does not have heat races; and incorporates three 10-lap Main Events, the racing was held on a split-start track designed by former Suzuki Champion Ricky Carmichael.

In the evening's first race, the starting gate on Stewart's side did not drop and the race was restarted. In the restart, Stewart got the holeshot but the alternate gate malfunctioned and caused another restart. Then, after two unsuccessful gate drops, the dirt bike racing commenced, but Stewart didn't get a clean launch and had to come from 19th, but he still managed to work his way up to an eighth-place finish.

In the second Main Event, Stewart more-than made-up for the unfortunate starting incidents earlier by getting the holeshot on his Yoshimura Suzuki RM-Z450 and leading all 10 laps to victory. In the night's final race, he got another good start, put his head down; and captured the lead halfway through the race. From there on out, the Yoshimura Suzuki rider never looked back and held the lead all the way to the flag. 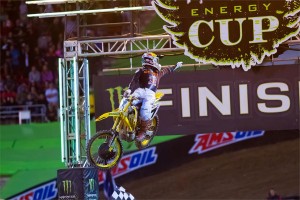 Said Stewart: "We're 100-grand richer but most importantly, we won! This was a special win for me. During the off-season, I took a month-off from riding and that helped me realize not only how much I appreciate winning, but also how much I appreciate racing, riding and having fun. I really wanted to come to this race for my fans and for my team. It's been great to come here and know that we're taking the right steps. I can't thank the whole Yoshimura Suzuki team enough - they gave me the RM-Z450 that I fell in love with. To be able to get out here and show it at a one-off race where everybody is going for it was amazing."

In addition to winning this year's hotly-contested Monster Energy Cup, Yoshimura Suzuki's Stewart celebrated a host of notable accomplishments throughout the 2013 racing season: In this year's AMA/ FIM Supercross, Stewart became one of just three racers ever to have gone nine straight seasons with a win after his victory at Atlanta's Georgia Dome. In AMA Pro Motocross, Stewart claimed the 2013 Holeshot Championship, as well as victory at the Spring Creek National in Millville, plus multiple podium finishes.

Yoshimura Suzuki Factory Racing's next race will be the season-opening round of the 2014 AMA/FIM Supercross Championships on Saturday, January 4th, at Angel Stadium in Anaheim, California


Yoshimura Suzuki 'Behind The Scenes' Video 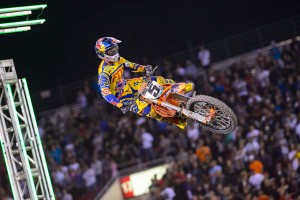 Red Bull KTM Factory riders Ryan Dungey and Ken Roczen both landed on the podium at the Monster Energy Cup held at Sam Boyd Stadium finishing 2nd and 3rd overall respectively after the three event motos. Their teammate, Marvin Musquin, was not far off the podium finishing 5th overall.

The Monster Energy Cup is based on a three-moto format where the scores of each moto are combined to determine the overall winner. It was Dungey who grabbed the best start of the KTM riders at the beginning of moto one, nearly edging out Ryan Villopoto for the holeshot. Dungey and Villopoto stayed neck and neck during the race. So much in fact, that Dungey actually forgot to take the joker line. A line that each rider has to take at least once during each race as a special feature of the Monster Cup race. When Dungey failed to take the joker line, he was able to pass Villopoto for the lead and take the win. Unfortunately, because he forgot to take the line, he was penalized five positions. This handed 2nd place to Musquin aboard his KTM 350 SX-F and 4th place to Roczen.

In moto two, both Roczen and Dungey jumped out to top five starts while Musquin was further back around mid-pack. Roczen and Dungey battled each other for a few laps before Dungey was able to move around Roczen. Dungey went on to finish 3rd, while Roczen finished 4th. Musquin moved up a few positions from his poor start to finish 9th. 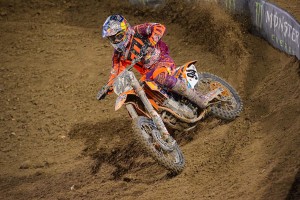 In the final moto, it was Roczen who nailed the holeshot. He led James Stewart for the first few laps before Stewart was able to make a pass for the lead. Soon, Dungey had climbed up and was also pressuring Roczen to take over a position. Dungey took the joker line early on in this race while Roczen and Stewart waited until the last lap.

When Roczen and Stewart entered the joker line, Dungey was able to capitalize on the situation and move around Roczen and came out side by side with Stewart. The crowd was on their feet as the two riders rode together to the finish with Stewart just edging out Dungey for the win. Roczen finished 3rd in that moto while Musquin had another solid ride for 8th.

After three motos, Dungey was able to move into 2nd overall for the night while Roczen finished right behind him in 3rd and Musquin rounded out the top five in 5th. The riders will now take a break before beginning to gear up for the start of the 2014 Monster Energy Supercross season.