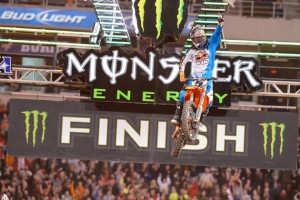 KTM Motorsports is pleased to announce it will debut a four-rider team at the upcoming Monster Energy Cup (MEC) held at Sam Boyd Stadium on October 19, 2013.

450 Motocross and Supercross star, Ryan Dungey, returns aboard his KTM 450 SX-F and is joined by teammate Ken Roczen also racing a Red Bull KTM 450. The MEC will mark Roczen's first race aboard the larger motorcycle since his announcement to move up to the big bike class at the end of the 2013 Lucas Oil Pro Motocross Championship Series.

With Roczen moving up, a wild card spot has been given to 2013 Canadian MX2 Champion, Austin Politelli to join Red Bull KTM Factory rider Marvin Musquin racing aboard the KTM 350 SX-F at the MEC event.

Politelli placed inside the top ten at multiple 250 West Coast Supercross rounds in the US earlier this season as a privateer. He then went to Canada for the first time to race the Canadian Motocross Championship Series where he was able to win the MX2 class title. 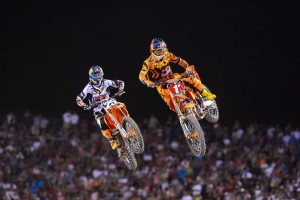 Marvin Musquin and Ken Roczen will be part of the four-man KTM team - Photo: Simon Cudby[/caption]

"With Roczen moving up to the 450 we have a spare 2013 KTM 350 SX-F at the shop so we are happy to give Austin the opportunity to display his abilities riding a factory prepared Red Bull KTM race bike," commented Red Bull KTM Team Manager Roger DeCoster. "Austin had a number of good finishes as a privateer this year racing the SX West Coast Series, including finishing 4th at San Diego SX. He then went on to win the Canadian MX2 Championship so I think he well deserves our support to race MEC. Plus, I really like the idea of a one-off wild card entry as the MEC race is known for being an anything can happen style of event."