Chaparral Motorsports
|
October 15, 2013
Championship Will Come Down To Final Round 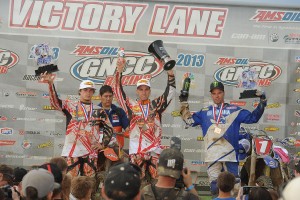 Factory FMF/KTM rider Charlie Mullins took the win in the XC1 Pro class at the twelfth round of the GNCC Series over teammate and current point's leader Kailub Russell. With one round remaining, the dirt bike championship title will go down to the wire.

The course was quite dusty but also had a few large mud holes that got the best of a lot of the amateur riders. Both Mullins and Russell got a good jump off the line sitting inside the top five at the start of the event.

Mullins moved through the pack quickly and by the second lap had passed Paul Whibley to take the lead. He immediately began to grow his lead and pull away out front. Russell struggled a little bit at the beginning of the race and lost some time to Mullins and Whibley. However, when the halfway mark came, Russell stepped it up and began to track down Whibley. Mullins sensed Russell was on the charge and also picked up his pace, turning the fastest lap of the race on the fifth lap.

It was on the fourth lap of the race when Russell made his move on Whibley. He was able to take over the second place position but continued to battle Whibley throughout the remaining two laps of the race. Meanwhile, Mullins never slowed out front and crossed the finish line to take the win with a one minute gap on Russell. 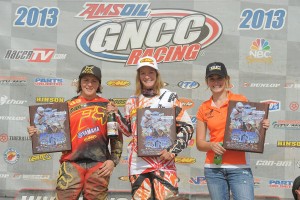 "We are very proud of both of our riders," stated Factory FMF/KTM Team Manager Antti Kallonen. "We are cheering for both riders as they have both had amazing seasons. Regardless of the outcome, the FMF/KTM team will finish first and second in the series which was our goal at the beginning of the season and something the entire team is proud of."

Steward Baylor made his return to racing after sitting out for 18 months with a wrist injury. This race was used for testing his bike set-up as his endurance is not quite ready to race the 3-hour pace. Baylor made progress on his bike and is looking forward to returning for the final round in two weeks.

In the XC2 Pro Lites class, Grant Baylor received a 2nd place start but dropped to 9th early in the race. He was able to pick his pace back up and moved to 6th place before running out of gas about Â¼ mile before the gas stop. The team quickly went to his rescue but he lost a few more spots. He eventually finished 7th overall. Despite not having the finish he wanted, he still holds a 21 point lead heading to the final round.

The women's class and morning overall was once again won by Maria Forsberg. The Factory FMF/KTM rider was challenged by RPM/KTM rider Kacy Martinez throughout most of the race. Forsberg eventually put a gap on Martinez on the final lap to take the win by approximately 45 seconds.