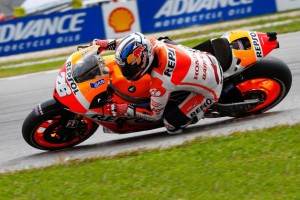 After several difficult weeks, Honda rider Dani Pedrosa returned to form - and the top of the podium - with a victory at the Sepang International Circuit in Malaysia. Pedrosa rebounded from minor injuries he accrued in the last motorsports event and dominated the race from the fourth lap on.

"I am very happy with this win, as it is very special," Pedrosa said. "My level of riding today was very good and the victory comes after a difficult week - in which I was laid up in bed and could hardly move. To come here and win is fantastic, so thanks to my team."

Behind him, Marc Marquez and Jorge Lorenzo battled for second, but Marquez managed to pull away in the ninth lap and easily grab the silver position.

The win keeps Pedrosa in the hunt for the championship title, but he still faces an uphill climb. Marquez's second-place finish allows him to maintain his spot atop the overall standings, while Lorenzo's third-place finish puts him 43 points behind in second. Even with the victory at Sepang, Pedrosa is 54 points out of the lead with only a few events remaining.

MotoGP continues the action with the Australian Grand Prix at Phillip Island, which is set for Oct. 18 to 20.