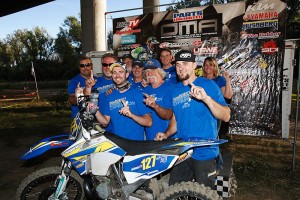 Factory Husaberg rider Russell Bobbitt took the overall win at the eighth round of the OMA Nationals in Council Bluffs, IA wrapping up the motorsports championship title with one round to go.

Off the grass start, Bobbitt swung wide through the long right-hand corner, missing the holeshot by half a bike length. "My rear tire spun a little on the grass," mentioned Bobbitt. "But I was able to make a pass for the lead in the second corner."

Bobbit had the lead for the majority of the first lap until a small fall caused him to give up a position to Kole Henslee. Bobbitt quickly collected himself and was able to regain the lead before the end of the lap. During the second lap Bobbitt noticed that his throttle was sticking and pulled into the pits, again losing a position to Henslee. "I must have tweeked my throttle housing in the fall," said Bobbitt. "I stopped in the pits and my mechanic and crew were ready to help. They got me going again within seconds." 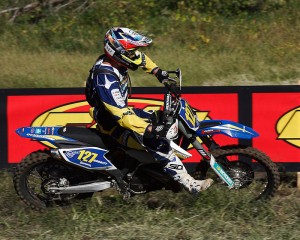 Russell Bobbitt took the overall win at the eighth round of the OMA Nationals - Photo: John Gasso[/caption]

Putting the first two laps behind him, Bobbitt put his head down and began to work on the lead rider of Kole Henslee. He was able to make a pass on Henslee in one of the sand sections to takeover 1st place. From there, Bobbitt continued to stretch out his lead finishing the eight-lap race minutes over the competition and clinching his first OMA National Championship.

"The course really suited me today," said Bobbitt. "Half of the course was deep sandy river beds and the other half was great single track with consistent dirt that rutted up. I'm happy to win this championship in my second year competing in the series."