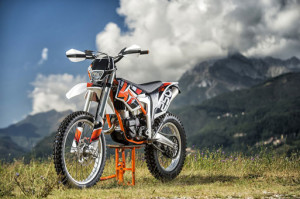 Newcomers to the world of dirt bikes deserve to learn the ropes of the sport on a quality bike. However, this is easier said than done, because so many of the machines made for beginners lack the power to handle all types of terrain. One dirt bike aiming to bridge this gap is the 2014 KTM Freeride 250 R.

At the heart of the Freeride is a two-stroke, water-cooled engine with a displacement of 250cc. As the premier two-stroke model in the KTM lineup, this machine is catered toward free riding. The power offered by the motor is more than enough to keep the bike humming in any environment, while the low-rev engine also provides the torque needed to get out of all situations.

Novice riders can get used to operating the six-speed transmission, which will mainly consist of using five gears with the sixth as an optional overdrive. That's all you need to control the new exhaust system and modern engine, both of which have been designed to strike a balance between an impressive power output and lightweight, manageable machinery. 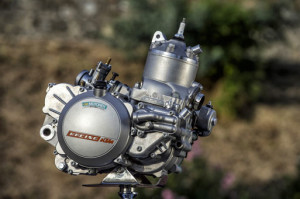 Just like the motor is designed to be ideal for freeriding, the body of this KTM bike has also been created with this in mind. As a result, comfort and unrestricted movement are emphasized. A long seat complete with a new locking system offers mobility, and the seat height is about 36 inches off the ground. While this is a bit higher than more advanced dirt bikes, it is great for riders who are just learning how to handle the motorcycle. Similarly, the handlebars and footpegs have been revamped for maximum comfort and security, allowing all riders to acclimate to the new feel of a dirt bike.

A variety of additional features set the 2014 KTM Freeride 250 R apart from some of its competitors. The fuel tank has increased to a capacity of 1.8 gallons, and with a new translucent container, you can take one look to see how much fuel is left. There is also a digital instrument panel that was made to have intuitive operation. 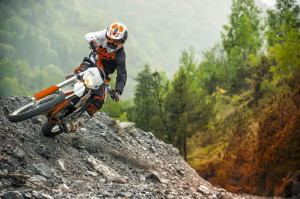 When you add some protective motocross gear into the mix, you'll have everything you need to get a freeriding career started. The 2014 KTM Freeride 250 R is slated to hit European showrooms soon and is on a path to becoming one of the top options for those riders just getting started in the world of motorsports and off-road biking. Let's hope they bring it to the United States soon!