EnduroCross Gets Into Its 2013 Season 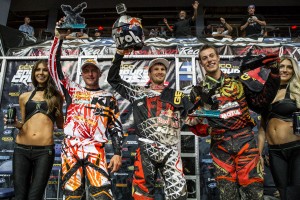 The third round of GEICO AMA EnduroCross took place over the weekend of Sept. 21, and it looks like many of the top dirt bike riders in the motorsports series are getting back in the groove of competition. Taddy Blazusiak, the defending champion, certainly regained his form, winning the Ontario round after a tough battle with rival Mike Brown.

Brown started out in front, leading the pack as the riders took off from the starting line. When he faltered on the firewood section of the race, however, he left the door open for his closest competitor. Blazusiak capitalized on the mistake, shooting forward to take over the lead, which he maintained for the remainder of the race.

"It feels so good to be back on top," Blazusiak said after the race. "I have been working really hard and I am glad I was able to challenge for the win and take the victory. Mike [Brown] is a tough competitor and it is good to always have someone push me."

With the win, Blazusiak gains some ground in the overall standings. He now sits in second place with 65 points, just seven points behind Brown. The next round of EnduroCross will take place in Denver Oct. 12.

Mike Brown and Cody Webb round out the podium 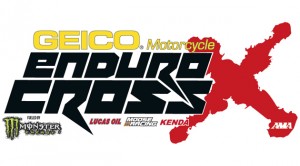 KTM's Taddy Blazusiak took an exciting win at round three of the 2013 GEICO AMA EnduroCross series, fueled by Monster Energy and presented by Lucas Oil in Ontario, California. Mike Brown led for five laps and looked poised to take his third EnduroCross win in a row until a small mistake allowed Blazusiak to take the lead. Beta's Cody Webb rode a steady race and kept the leaders in sight to take the final podium position.

Brown took the early lead over Haaker at the start with Gary Sutherlin third and Blazusiak fourth. Haaker stalled his bike on the second lap and Blazusiak had already passed Sutherlin so he was quickly into second. The two KTM riders looked evenly matched until the sixth lap when Brown got held up by a down Geoff Aaron. Blazusiak took advantage of that and squeezed past Brown to take the lead at the halfway point. Brown kept it very close and Webb had also moved to within striking distance after Blazusiak and Brown got hung up in one of the rock sections. Blazusiak was able to hold a safe margin over the last few laps.

Monster Kawasaki's Robert moved through the field to take fourth ahead of Haaker. Kyle Redmond finished sixth in his first ride on a KTM 250 Two-Stroke. Sutherlin finished seventh, Cory Graffunder was eighth, Justin Soule was ninth and Geoff Aaron rounded out the top ten. 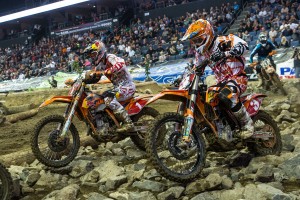 Mike Brown will take a seven point lead over Taddy Blazusiak into the next round of the series - Photo: Drew Ruiz[/caption]

Brown will take a seven point lead over Blazusiak into the next round of the series in Denver, Colorado on October 12th. Robert maintains third position another ten points back. Brown has 72, Blazusiak 65 and Robert 55.

Canada's Chantelle Bykerk took the Women's main event win over Rachel Gutish and Morgan Tanke. It was one of the largest Women's fields to date with nearly twenty riders competing for the 12 main event spots. 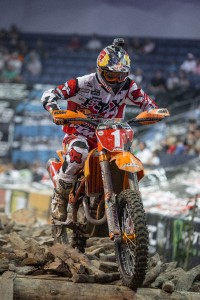 Red Bull KTM Factory rider Taddy Blazusiak took his first victory of the season after a tight battle with series point's leader, Factory FMF/KTM's Mike Brown, at the third round of the series held at Citizens Bank Arena.

Brown, the winner of the first two rounds of the series, started the night off well after grabbing the holeshot in his heat. He went on to lead the entire heat to take the win and transfer into the main event.

Blazusiak followed in Brown's footsteps and led each lap of his heat to also take a win and a spot in the main event. "I switched to the 250 XC-F for this event," stated Blazusiak. "The bike is great and feels much lighter than my previous bike so I can easily maneuver around the track."

When the gate dropped for the main event, it was Brown who launched off the line first and came around the first corner and into the rock section with the lead. Blazusiak was right behind him in second position. The two teammates pulled away from the rest of the field and began their race long battle. Brown held the lead through the first half of the race before he made a mistake in the firewood section that allowed Blazusiak to close the gap. The next corner, Blazusiak made his pass for the lead. 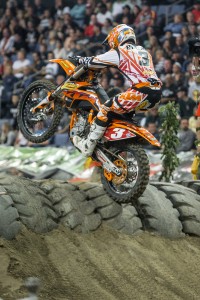 Brown did not let Blazusiak out of his sight and the two remained close for the remaining laps. When the checkered flag flew, it was Blazusiak who held on for the win with Brown finishing second. Cody Webb rounded out the podium in third.

"It feels so good to be back on top," commented Blazusiak. "I have been working really hard and I am glad I was able to challenge for the win and take the victory. Brown is a tough competitor and it is good to always have someone push me."

Brown commented, "I'm glad to be on the podium for my team, but of course, I would rather be on the top step. Taddy and I were close today and there are a lot of races left so I need to work harder to get on the top step and maintain my points lead."


Cory Graffunder Back In Action

Factory Husqvarna's Cory Graffunder was back in action in Ontario, California where round three of the AMA EnduroCross series was underway. Graffunder was looking to repeat his podium performance from round two, but had to settle for eighth in the main event.

"It wasn't really an ideal night," Graffunder lamented. "I never jumped the matrix - a lot of guys were jumping that and I probably should have."

Graffunder was still able to maintain his position in overall points, leaving Ontario still in a solid fifth overall. With only three of the seven rounds in the books, Cory has hopes of getting his TXC310R back up on the podium at an AMA EnduroCross this season.