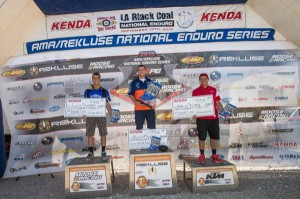 Charlie Mullins wrapped up the 2013 Rekluse AMA National Enduro Series championship with one dirt bike race remaining on the schedule by taking the overall win at this weekend's Black Coal National Enduro in Lynnville, Indiana.

Mullins came into the race needing only to finish ahead of Radiant AirGroup Racing's Nick Fahringer to sew up the title and the FMF/KTM rider did just that... and more.

Mullins was also gunning for the Radiant AirGroup Racing Bounty money, which is awarded to any rider who can win all six tests in a single race. And while Mullins won four of the six tests, he was thwarted in the third and fourth tests by Andrew DeLong and Jesse Groemm, respectively, so the Bounty will roll over to the Oklahoma round where it will now be worth $5000.

After getting off to a great start, one that saw him win the first three tests of the day, Mullins overcame problems in tests four and five before finishing up with a strong ride to win the sixth and final test. The Ohio-born rider and 2010 AMA National Enduro Champ finished the event with a minute-and-a-half edge over Am Pro Yamaha's Groemm, with DeLong rounding out the podium on his FAR Husqvarna. 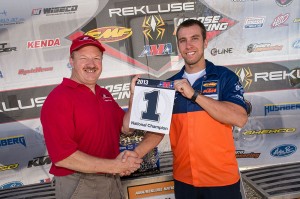 "It certainly feels good to win another Enduro title, and especially to do it early," said Mullins. "This was a great event and I just got off to a good start and then just tried to manage the race from there."

Groemm's runner-up finish was the New Jersey rider's best performance yet in the series and it moved him up to sixth in the overall standings. Meanwhile, DeLong's third place finish was impressive considering it was his first race back after spending the last few months recovering from a broken hand.

Fahringer just barely missed out on fourth, but still maintains second in the standings despite finishing off the podium for only the second time all year. 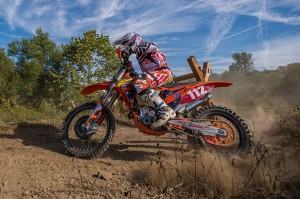 After Bobbitt was Grant Baylor's KTM in seventh, while eight-time champ Mike Lafferty finished eighth on a factory Husaberg.

Colorado rider Ian Blythe rode strong to ninth, with Tanner Thomas rounding out the top 10 on a 150cc KTM. Thomas also won the 200A division.

Factory FMF/KTM rider Charlie Mullins took the overall and the championship at the ninth round of the AMA National Enduro Series! 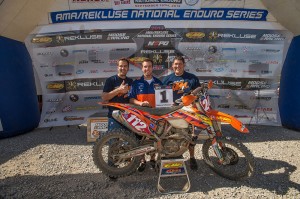 Factory FMF/KTM rider Charlie Mullins was crowned the 2013 Rekluse/AMA National Enduro Champion after winning the ninth round of the series to clinch the title one round early.

Mullins was on the gas all day as he won the first two special tests and tied for the lead in the third. At the halfway point he had already accumulated a minute lead on the field as the riders headed toward the fourth test of the afternoon. He finished second in the next two tests and the rebounded to take the win in the final test session to win the overall and his second career AMA National Enduro title.

"I felt really good all day," remarked Mullins. "The course was slightly dusty but overall really good and I was able to put together a great ride. I am relieved to earn this title one round early and now focus on the GNCC Series and representing Team USA in the ISDE."

Factory FMF/KTM Team Manager, Antti Kallonen, commented, "The entire team is proud of Charlie and his effort this season. This is our team's second championship this season (Kurt Caselli wrapped up the 2013 AMA National Hare and Hound Championship two weeks ago) and we couldn't be happier with our riders performances. Charlie was the man to beat all season and is most deserving of this title."