Looking Ahead To The San Marino Grand Prix 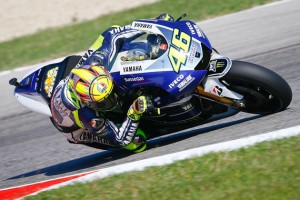 After a brief break, the riders of MotoGP are back in action at the San Marino Grand Prix. The 13th round of the motorsports series heads to the Misano circuit, and the competition looks fierce, as a number of riders have experienced recent success and could challenge for the win.

At the forefront of the pack is Marc Marquez, who is leading the overall standings after an impressive stretch of four consecutive wins. His streak was broken by Jorge Lorenzo, who crossed the finish line 0.008 seconds ahead of Marquez during the race at the Silverstone track a few weeks ago.

If there's one competitor to watch at San Marino, it is Valentino Rossi. The Yamaha rider has a history of performing well on the track and has a special connection to it, as he grew up in the area.

"Misano is my home grand prix and an important weekend," Rossi told Crash.net. "I like the track - I always go fast there, especially with the Yamaha - and last year also I was able to do a very good race. ... We will arrive very strong and we will try to do our best."

All eyes may be on these three riders, but Dani Pedrosa is also expected to quietly compete for the lead. Pedrosa is currently second in the overall standings despite battling an injury.