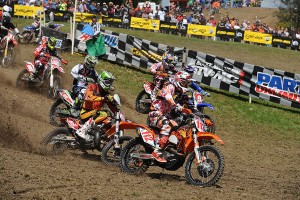 Charlie Mullins kicked off the three-hour battle with the $250 All Balls Racing Holeshot - Photo: Harlen Foley[/caption]

The AMSOIL Grand National Cross Country Series kicked off the second portion of its 2013 season on Sunday with Round 10 of the 13-race series from the legendary Unadilla Raceway in New Berlin, NY. The Can-Am Unadilla GNCC hosted a record number of nearly 2,000 ATV and motorcycle racers over the weekend, culminating with three-hours of excitement in the XC1 Pro Class. In an all-out battle to the finish, Kailub Russell secured his fourth consecutive win of the season to take over the points lead in the National Championship standings, while Andrew DeLong put forth a dominant performance in the XC2 Pro Lites Class.

Factory FMF/KTM's Charlie Mullins kicked off the three-hour battle with the $250 All Balls Racing Holeshot as an onslaught of XC1 competition followed close behind. In his first GNCC appearance of the season, Massachusetts's Jonathan Girroir immediately joined the lead battle with Mullins and Russell on the opening lap. Mullins eventually made his way past Girroir on Lap 2 and from there; it became a head-to-head battle for the number one position.

Rocky Mountain ATV/MC's Josh Strang got a top five start, hooking up with Shenandoah Honda/USWE-Sports.com's Thad DuVall, along with AmPro Yamaha's Jordan Ashburn and Nytro Handgaurds/B.R.E KTM's Chris Bach early on. After the first three laps, DuVall began experiencing problems and eventually pulled into his pit area. The pit crew swapped out the rear wheel and DuVall returned to racing, despite losing a substantial amount of time and several positions along the way.

Just as DuVall dropped back, FMF/RPM/KTM Team Maxxis' Rory Mead gained four positions right away, making his final passes on Girroir and Strang to take over third place. Mead turned the pace up another notch around the halfway point as the New Zealand native pushed his way into the lead battle of Mullins and Russell just a few seconds ahead. 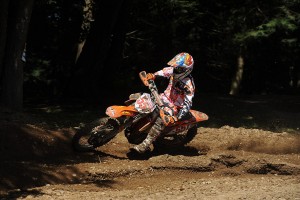 Kailub Russell secured his fourth consecutive win of the season to take over the points lead - Photo: Harlen Foley[/caption]

With two laps to go, Strang entered himself into the mix as well, eventually passing Mead to reclaim the third place position. From there, it was a three-way battle to the finish as Russell, Mullins and Strang battled wheel-to-wheel throughout the final lap of racing.

Russell led the way into the final stretch of the Unadilla motocross track with favorable positioning as Mullins and Strang rode side-by-side into the final turns before the finish line. After nearly three hours of battle, Russell was able to hold off the two former GNCC champions and claim his fourth consecutive victory in 2013.

In an exciting conclusion, Mullins held his line and bested Strang for the second place position, while Strang came in a close third. Mead maintained a comfortable position behind the lead battle where he finished a season-best fourth overall for the day. 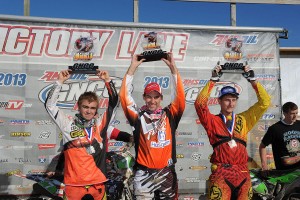 DeLong was joined out front by GEICO Honda's Zach Osborne as the motocross/supercross star jumped in behind DeLong on the opening lap. Osborne continued to apply the pressure in the early parts of the three-hour race.

Meanwhile, Thomas continued to work his way through the pack, where he ran as high as fourth place in the class. However, the defending XC2 Champion was forced to return to the pits on Lap 3 where his crew replaced a pipe and radiator during the race. Thomas returned to action but wasn't able to salvage championship points with a 22nd place finish in the class.

DeLong went on to capture his fourth XC2 victory of the season, while Osborne finished a GNCC career-best of second place at Unadilla. Ohio's Scott Grills maintained a consistent ride amidst all the chaos, capturing a season-best third place in the XC2 class. Baylor finished fourth for the day where he maintains the points lead over Thomas with three rounds remaining. 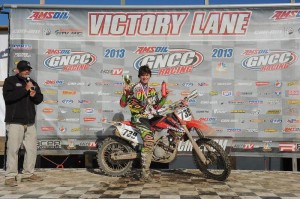 North Carolina's Trevor Bollinger grabbed another victory in the 4 Stroke A Lites Class, also securing the Top Amateur Award with 20th overall for the day. The next finishing amateur rider was 250 A winner Dylan Macritchie with 23rd overall.

The 2013 AMSOIL Grand National Cross Country Series continues September 21 and 22 with the Car-Mate Gusher GNCC. For more information on the series, visit www.gnccracing.com. 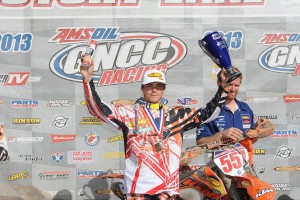 Kailub Russell took the win at the tenth round of the GNCC Series after an all-day battle - Photo: Harlen Foley[/caption]

Factory FMF/KTM rider Kailub Russell took the win at the tenth round of the GNCC Series after an all-day battle with teammate Charlie Mullins. Russell's win at the Unadilla track allows him to take over the championship points lead as they head to the next round.

The two factory riders have been racing close since the opening round of the GNCC Series back in March. Despite their constant nail biting performances, the two riders managed to finish in an even tighter battle than usual - this time crossing the line just a second apart.

It was Mullins who grabbed the holeshot at the start of the race and was able to lead the first lap. Russell made a pass on Mullins for the lead at the beginning of the second lap but Mullins never fell back. The two riders remained within 5 seconds of each other for the eight lap race. After the halfway mark, they were joined by the third place ride of Josh Strang who had stepped up to challenge for the lead position. The three riders continued their close battle. 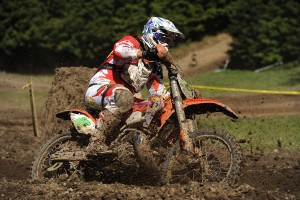 Despite being pressured the entire race, Russell was able to hold on to take the victory while Mullins held off Strang to secure second place. Now ten rounds into the series, Russell leads the championship point chase by 5 points over Mullins.

"It feels really good to get the win here today and take over the point lead," stated Russell. "As usual, Charlie gave me a good battle the whole day and I am happy I was able to come out on top."

KTM support rider and current GNCC XC2 Pro Lites point's leader, Grant Baylor, grabbed the holeshot off the start of the XC2 race but crashed in the second corner. When he recovered, he was nearly dead last and had to spend the rest of the race trying to catch the leaders. At the end of the race, he was able to move up to 4th position. He still holds a 37 point lead on the championship. 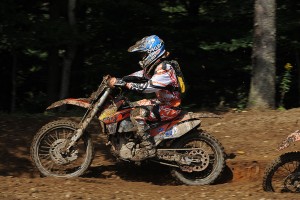 Factory FMF/KTM rider Maria Forsberg put together her sixth win in the Women's GNCC class. She was challenged by fellow KTM rider Kacy Martinez for the first half of the race before Martinez suffered a crash and lost some time to Forsberg. Forsberg went on to pull a 3 minute lead on the pack before crossing the checkers to take the win in her class, but also the overall for the morning class of a recording-breaking 715 riders. Martinez joined her on the podium earning second overall for the morning class. 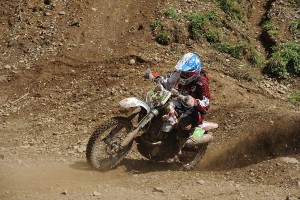 Andrew DeLong returned to his winning ways over the weekend - Photo: Ken Hill[/caption]

Guess who's back! Andrew DeLong returned to his winning ways over the weekend where he not only dominated the XC2 Pro class, but also climbed into the top-five overall in the P.M. race at the Unadilla GNCC. DeLong and his Fred Andrews Racing (FAR) Husqvarna TXC250R tackled the New York terrain, including the infamous Unadilla Raceway motocross track, and controlled nearly the entire race to emerge victorious.

"I've been working hard the whole break and it showed today," said Andrew, who had been fighting to regain his fitness after suffering a broken hand earlier in the season. "I want to thank my team and sponsors for sticking with me. I had a lot of fun today and all my hard work paid off."

DeLong had his hands full fending off hard-charging pro motocrosser Zach Osborne, who pressured Andrew on the motocross track nearly every lap. The two remained close up until late in the race when Andrew's mechanic told him to "put the hammer down!" From there Andrew relied on his conditioning to propel him to a two-minute lead in the last two laps of the race, and also break into the top-five overall.

"I'm really proud of AD today," commented FAR Husqvarna's Fred Andrews. "His training really came through today and he rode the wheels off his TXC250R!"

The next race for the crew at Fred Andrews Racing will be the LA Black Coal National Enduro in Lynnville, Indiana.