Chaz Davies, Tom Sykes Come Out On Top In Germany 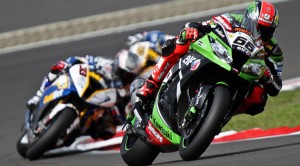 and Tom Sykes emerged as the big winners from the most recent World Superbike round at the Nurburgring circuit in Germany. The two split the motorsports races, both of which ended early when red flags halted the contest due to serious crashes on the track.

Sykes won the first race, narrowly beating out Marco Melandri, while Davies finished third. During the second moto, Davies came out on top, beating out Eugene Laverty, Melandri and Sykes. The strong finish gave Davies the overall win on the day, but Sykes managed to earn enough points to climb atop the season standings. He is now one point ahead of Aprilia's Sylvain Guintoli and 30 points in front of Melandri.

The race was not without drama. Honda's Jonathan Rea and Suzuki's Leon Camier crashed during the first moto, resulting in a broken leg for Rea and potential neck injuries for Camier. Kawasaki's Loris Baz also crashed before the race, fracturing a vertebra but not suffering from more serious damage, Motorcycle.com reported.

Only four rounds remain in the 2013 World Superbike season, and the championship is still up for grabs. The next race is scheduled for Sept. 15 in Istanbul, Turkey.