Ryan Villopoto Closes Out The Motocross Season In Style 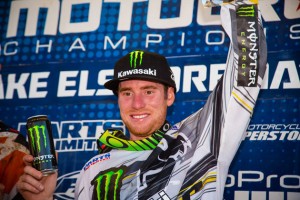 wrapped up the 2013 AMA Motocross season with a strong showing at Lake Elsinore, Calif., defeating the field in dominant fashion to close out the year. Although the Kawasaki dirt bike rider clinched the championship title last week, he stayed focused throughout the 12th and final round of the motorsports series and ended up sweeping the two motos.

Red Bull KTM's Ryan Dungey finished second in each moto, securing his spot in second place for the season. Honda's Justin Barcia was a distant third, but still far ahead of the remaining competitors.

With the victory, Villopoto earned his eighth overall championship and his second AMA motocross championship in the past three years. This run places him among the best motocross racers ever, according to some big names in the world of motorsports.

"It may be time to carve out a new face on the Mount Rushmore of motocross," Davey Coombs, vice president of the Lucas Oil Motocross Championships, told The Washington Post. "... Without a doubt, he's proven himself week after week to be the best rider, and the other thing he has done is proven himself to be the smartest rider out there."

Now that the season has come to a close, Villopoto will undergo surgery on his ankle, Ultimate Motorcycling reported.