Russell Bobbitt Captures Win At Round 7 Of The OMA Nationals 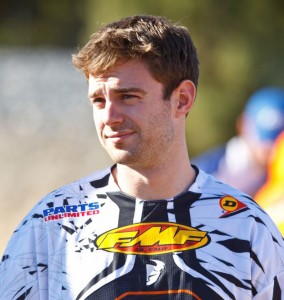 Factory Husaberg rider Russell Bobbitt captured his fifth win of the season at the seventh round of the OMA Nationals aboard his Husaberg TE300.

Bobbitt launched off the line to a great start grabbing the holeshot. "It was a shorter course than normal," Bobbitt reported. "There was a lot of rolling hills but also some really slick sections down in the creek beds."

Bobbitt led the first two laps of the race before AirGroup Radiant Husaberg rider Nick Fahringer made a pass for the lead. Bobbitt remained close to Fahringer and was able to capitalize on Fahringer's mistake a lap later when Fahringer crashed in a slick section. Bobbitt took over the lead and began to pull away. By the end of the race, Bobbitt had stretched his lead to over one minute on Fahringer, who held on to finish second.

The riders will now take a month break before the next event which is scheduled for September 28-29, 2013 in Council Bluffs, IA. "I am excited for the next round. I hope to take the win there and hopefully wrap up the championship one round early," stated Bobbitt.