US Names Team For Motocross Of Nations 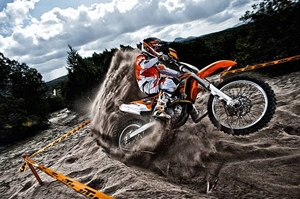 The American Motorcyclist Association recently announced the team that will be representing the U.S. at the upcoming FIM Motocross of Nations. While the American motorsports team will be missing Ryan Villopoto, the champion of this year's AMA motocross season, due to injury, the squad will look to veteran Ryan Dungey to take the lead on his KTM dirt bike.

"I'm excited and obviously it's an honor," Dungey said. "Last year was a little rough, but this year will be better. We're all pretty good riders. We all work hard, we all get along and we're on the same page seeking a world team title. We'll work together and push each other and bring it, and if we can do that I think we'll win back the title this year."

Joining Dungey is Justin Barcia, who has competed in Motocross of Nations in the past, and newcomer Eli Tomac. Both Dungey and Barcia will ride 450s, and Tomac will use a 250 bike.

The Motocross of Nations kicks off Sept. 28 in Teutschenthal, Germany. Riders from all over the world will be competing, but the U.S. team will have its sights set on the German squad, who broke the Americans' seven-year win streak last year.