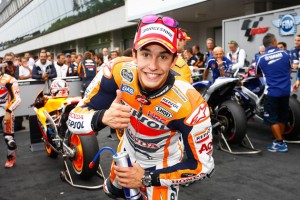 The 11th round of the MotoGP calendar is slated to take place this weekend in the Czech Republic. All of the action will go down at the Brno circuit, which is widely considered to be one of the best motorsports spots to race in the world.

Marc Marquez enters the race as the favorite. The rookie is coming off a dominant win at last weekend's Indianapolis Grand Prix and has a tentative hold on the lead in the championship standings. He will certainly be challenged by perennial contenders Jorge Lorenzo and Dani Pedrosa, both of whom are bouncing back from injuries. These veterans also have plenty of experience at the difficult Brno track, which could make a difference come race time.

"Last year at this circuit we saw an amazing last-lap battle between Jorge and Dani, and I expect both these riders to be very competitive this weekend as they continue their recovery from injury and focus on closing the championship points gap to Marc [Marquez], who is riding extremely well at the moment," said Hiroshi Yamada, manager of the Bridgestone Motosport Department.

The competitors will also have to watch out for Valentino Rossi, who has had success at Brno in the past and has been riding well as of late.