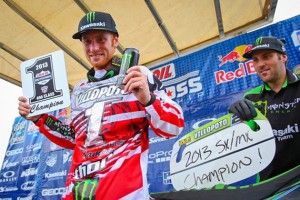 Ryan Villopoto is one of the most consistent racers in the world of AMA Motocross, and his efforts so far this season have paid off. After completing the penultimate round of the 2013 motorsports season, the Kawasaki rider officially clinched the championship for his second motorsports title of the year. He previously won the AMA Supercross, where he also secured his status in the second to last round.

Heading into the event, which was held at Miller Motorsports Park in Utah, Villopoto knew he needed to sweep both motos to wrap up the title. Despite a strong effort by rival Ryan Dungey, who finished second in each race, Villopoto managed to easily cross the finish line first and earn the points he needed to claim the championship.

"It is gnarly to be at this level of racing, but you just take it year by year and race by race," Villopoto told Ultimate Motorcycling. "There's really no time to sit down and look at it as 'how many races do we need to win.' The thing that keeps us going is definitely winning."

Dungey has clinched a second-place finish on the season, but final podium spot is still up for grabs.