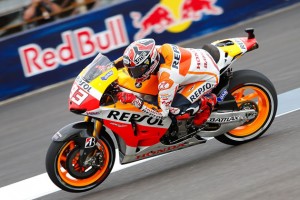 MotoGP rookie Marc Marquez started the second half of the motorsports season with a bang. The Honda rider won his fourth race of the season in dominant fashion, clocking the best times in the practice session and qualifying rounds as well as the main event at the Indianapolis Grand Prix in Indiana. Marquez passed teammate Dani Pedrosa and reigning champion Jorge Lorenzo about halfway through the race, and the young rider held onto the lead as Pedrosa finished second and Lorenzo third.

This was the first time a rider swept all aspects of a motorsports event since Casey Stoner did it at the Australian Grand Prix last year. The victory also gave Marquez wins in all three of the MotoGP events held on American soil this year.

"I knew before we came here that this would be a good opportunity, and I was able to take advantage of it," Marquez said. "I felt very good throughout the weekend, and I think this has been my best GP overall since coming into the premier class. I was first in every session, so I couldn't ask for more."

With the win, Marquez is now 21 points ahead of Pedrosa for the standings lead. Lorenzo is 14 points behind Pedrosa in third.