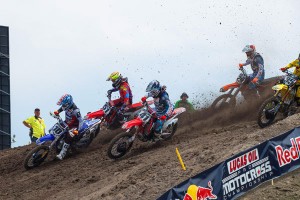 Over 21,000 fans were on hand to witness a historic day at Miller Motorsports Park for Saturday's Built Ford Tough Utah National, where two motocross champions were crowned at the inaugural event in Tooele, Utah. By virtue of a 1-1 moto sweep, Monster Energy Kawasaki's Ryan Villopoto captured his second career 450 Class Championship, while GEICO Honda's Eli Tomac clinched his first ever 250 Class title at Round 11 of the 2013 Lucas Oil Pro Motocross Championship, sanctioned by AMA Pro Racing.

Villopoto began the day with his third consecutive holeshot in Moto 1 of the 450 Class, immediately putting a gap on the rest of the field. Toyota/JGR/Yamaha's Justin Brayton jumped into the second place position early on, with Red Bull KTM's Ryan Dungey and Yoshimura Suzuki's James Stewart close in tow. Team Honda Muscle Milk's Trey Canard made his way into third, where he maintained a comfortable position throughout the first moto. 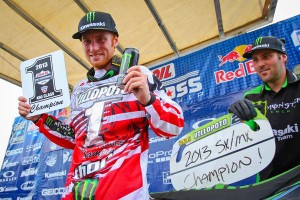 Ryan Villopoto wrapped up the 450 Class Championship at the penultimate round - Photo: Matt Rice[/caption]

Rockstar Energy Racing's Ryan Sipes captured the holeshot in Moto 2 but it was Villopoto who commanded the early lead. Dungey stuck close behind as the 2012 450 Class Champion attempted to keep his title hopes alive at the penultimate round. However, Villopoto set a pace that couldn't be matched, finishing eleven seconds ahead of Dungey in Moto 2.

Canard put forth a strong performance at the inaugural event, claiming third overall with a pair of third place finishes. 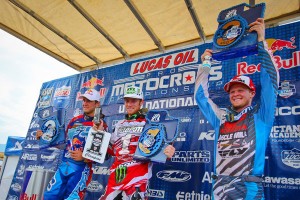 "It is gnarly to be at this level of racing but you just take it year by year and race by race. There's really no time to sit down and look at it as how many races do we need to win," Villopoto commented regarding his career number of championships. "The thing that keeps us going as racers is definitely winning. Yeah, winning is fun but during the week it's tough."

In the 250 Class, Monster Energy/Pro Circuit/Kawasaki's Martin Davalos grabbed the holeshot in Moto 1 but the GEICO Honda teammates of Zach Osborne, Justin Bogle and Wil Hahn surrounded the leader right away. Osborne briefly took over the lead before 250 Class points leader Eli Tomac made his move to the front.

Rookie Adam Cianciarulo inserted his Monster Energy/Pro Circuit/Kawasaki into the brigade of Hondas early on where he maintained the second place position for a majority of the race. Reigning 250 Class Champion Blake Baggett began Moto 1 outside the top ten but the Monster Energy/Pro Circuit/Kawasaki rider caught and eventually passed his teammate for the second place position. Cianciarulo held on to capture a career best finish of third place in Moto 1, followed by Tomac's closest title challenger, Red Bull KTM's Ken Roczen. 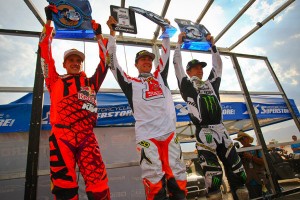 Heading into Moto 2, the 250 Class Championship was still up for grabs as Tomac and Roczen went head-to-head for valuable points. GEICO Honda's Justin Bogle grabbed the holeshot and the early lead until Roczen took it over on Lap 7. Tomac came from behind to apply pressure on Roczen before the points leader eventually took over the lead position.

Although Tomac had the upper hand on Roczen in Moto 2, the championship wasn't completely determined until Baggett entered the second place battle with Roczen late in the race. Baggett's last-lap pass on Roczen was enough to give Tomac the edge he needed to secure the 250 Class Championship with a 1-1 sweep at the penultimate round.

"I didn't really know I had the championship wrapped up, I was just going with the flow," Tomac said after Moto 2. "I didn't really think it was going to happen today, I am sort of in shock right now. I think it will sink in more after I get some rest, right now I'm pretty tired and just out of energy." 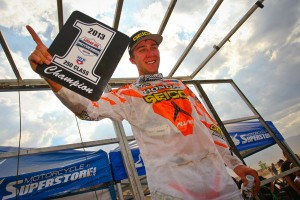 Baggett captured second overall with a consistent 2-2 moto score, while Roczen came in third with 4-3 finishes. 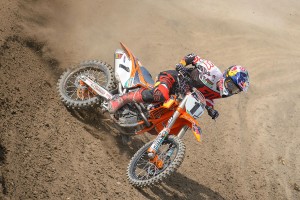 Ryan Dungey started the first moto in 7th place and quickly went to work to climb toward a podium position. Four minutes into the race, he had already moved in 4th place and began to battle James Stewart for 3rd. Dungey was able to jump past Stewart to take over the position and work his way up to Trey Canard who was sitting 2nd. The two riders battled for the next three laps before Dungey was able to make an inside pass to gain the position. Dungey held strong for the remainder of the race to finish in that position putting his KTM 450 SX-F on the podium.

Dungey improved his start for the second moto and came around the first corner in 4th position. He made two passes around Canard and Ryan Sipes early in the race to move into the runner-up position before the end of the first lap. He again put together a solid performance on the rough course to hold onto his position for the remainder of the race to earn another 2nd place result. His 2-2 results earned him 2nd overall for the day. 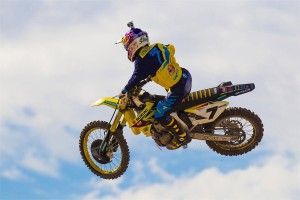 James Stewart opted to retire early for the day after another injury.[/caption]

The first-ever Utah National saw Yoshimura Suzuki Factory Racing's James Stewart turn in 100% effort on Saturday in Tooele, Utah. Despite coming into round 11 of the 2013 AMA Pro Motocross Championships still injured from last week's crashes, Stewart showed his true mettle by qualifying second fastest and running in a podium position.

In the first moto, he got a good start on his Yoshimura Suzuki RM-Z450 and slotted into a podium spot within the first few turns. As the 30-minute moto progressed, Stewart continued to fight for a podium finish until about midway through the race, when he encountered a lapped rider and wound-up casing the triple jump. Already suffering from previously incurred injuries, he opted to retire early for the day.

"Practice went pretty good," said Stewart. "I qualified second in both sessions. It's a new track and it felt a lot like a Supercross track. In the first moto, I got a pretty decent start and I made my way into third on the Yoshimura Suzuki RM-Z450, then I came around and there was a lapper on the triple step-up and at the last minute I had to change my line because he didn't jump it and I came up short. I have to thank the Yoshimura Suzuki team for all their hard work. It's just a bummer because we had so much momentum going until all this happened. Now I just want to get re-evaluated and see where we stand before the last race."

Yoshimura Suzuki Factory Racing's next race is the final round 12 of the 2013 AMA Pro Motocross Championships on Saturday, August 24th, at the Lake Elsinore National in Lake Elsinore, California.

Check out the Utah "Behind The Scenes Race Report" Video:


Ken Roczen Lands On The Podium At Miller Motorsports Park 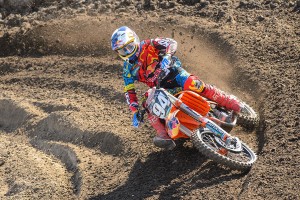 Red Bull KTM Factory rider Ken Roczen earned 3rd overall in the 250 Motocross class at the eleventh round of the Lucas Oil Pro Motocross Championship Series held at a new location, Miller Motorsports Park. His teammate, Marvin Musquin, made the best of an off day and was able to finish inside the top ten with 7th overall.

Both Marvin Musquin and Ken Roczen suffered from poor starts at the beginning of moto one. Roczen was marked in 14th position at the end of the first lap while Musquin was 8th. Roczen quickly set to work to pick off riders and had moved into 7th position by the fourth lap of the race. He continued to plug away and improve his pace and found himself inside the top five around the halfway point. With five laps to go, Roczen made his way around Zach Osborne to take over 4th position but ran out of time to catch the podium riders.

"I really made a lot of mistakes at the beginning of the race and lost a lot of time," stated Roczen. "I felt really good near the end of the moto and thought my bike was running well for the track conditions. Unfortunately, I just took too long to get started."

His teammate was able to finish one position behind him in the first moto, taking home 5th place. "I did not feel good the whole moto," reported Musquin. "The track was tough, but they always are. I just struggled a little and have some things I need to work on. My thumb got a little sore so I will need to work on that before the next moto." 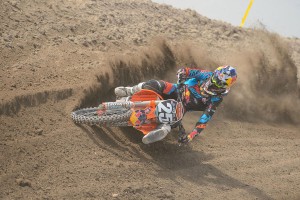 In the second moto, both KTM teammates came around the first corner in approximately 5th position. Roczen made a move past Musquin and a few other riders early on to move into 3rd place by the end of the second lap. Meanwhile, Musquin raced for 4th position for the first half of the race. Unfortunately, Musquin suffered a big crash at the halfway point of the race and lost a lot of time and positions as he recovered. He eventually returned to the track in 10th position. He spent the remainder of the race making up time and was able to climb back to 8th place by the moto end. His 5-8 results earned him 7th overall for the day.

Out front, Roczen was able to move into the lead position by the end of the fourth lap. He went on to lead for the next eight laps before losing the position to Eli Tomac. It was around this time that the wind began to kick up and cause a huge dust storm to blow across the track and the pits. Many spectators assumed the race might get red flagged. It caused many riders, including Roczen, to slow down and stop jumping some of the jumps. The race was not red flagged, and unfortunately, the caution Roczen took allowed Blake Baggett to close in. On the final lap, Baggett was able to pass Roczen to take over 2nd place and Roczen went on to finish the moto immediately behind him in 3rd position.

"It was definitely scary to race the last few laps with the wind," stated Roczen. "Visibility was really poor and it did not feel safe to race at the normal pace so I had to back off. I am bummed it cost me a position, but happy to finish safely and on the podium." Roczen's 4-3 moto results earned him 3rd overall for the day.