In addition to the team title, U.S. rider Aiden Tijero, from Danville, Calif., earned the individual world championship in the 65cc class at the event, which broke participation records with 231 entries and 41 countries taking part.

"I can't begin to say how proud I am of the entire team," said AMA Motocross Manager Kip Bigelow. "It took a commitment from every rider on the team to pull off the victory. After finishing third on the podium last year, the riders and the families knew that winning the team championship was not going to be easy. However, the team spirit was at an all-time high and working together was really important to everybody. I'm exceptionally proud of Aiden on his 65cc FIM World Championship. Aiden and his teammate, Max Miller, played a big role in this victory as the only two riders in the 65cc class. By winning the class, Aiden proved that he is a true champion." 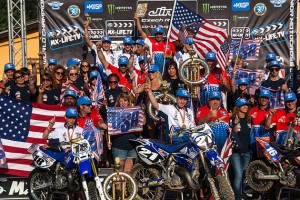 Tijero, who is a member of the KTM Orange Brigade, was joined in the 10-12 year-old 65cc class by fellow KTM rider Miller, from Springfield, Ore.

Riding in the 13-17 year-old 125cc class along with Balkovic were Rock River Racing riders Cole Barbieri from Ukiah, Calif., and Tristan Charboneau from Tenino, Wash; KTM rider Alexander Frye from Huntington, Md.; and Josh Mosiman from Seabastopol, Calif., aboard his Bonamigo Suzuki.

In individual FIM world titles, Tijero was joined by Great Britain's Conrad Mewse in the 85cc class and Latvia's Pauls Jonass in the 125cc class.