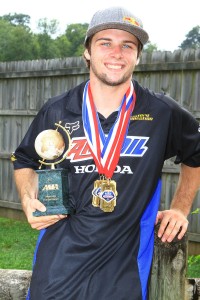 "The Red Bull AMA Amateur National Motocross Championship is the country's premier amateur motocross event, and the riders who raise AMA No. 1 plates over their heads here can count themselves among the best of the best," said AMA Motocross Manager Kip Bigelow. "We congratulate all the riders for excelling on the national stage, and we once again thank our promotional and organizational partner MX Sports for providing an exceptional experience for thousands of AMA members, from track prep to the awards ceremonies."

Among the most decorated racers over the week of competition was AMA Motocross Horizon Award winner and AMSOIL/Factory Connection Honda rider Matt Bisceglia from Weatherford, Texas. Bisceglia swept all three motos in the Open Pro Sport class and scored two firsts and a second in the 250 A class for two national titles.

"The week was great," Bisceglia said. "I rode smart and put in six good motos. I just got good starts and did what I had to do. I won the AMA Horizon Award, and I was real happy with that. It's an honor to win that award. It has been a dream of mine since I was nice years old and watched Ryan Villopoto win it my first year at the nationals."

Bisceglia, whose father Don raced at the pro level, will start his pro career next weekend at the Lucas Oil AMA Pro Motocross Championships on Aug. 10 at Unadilla in New Berlin, N.Y.

"I'm really excited for the pro nationals this weekend," he said. "It almost feels like it's not real. It's something I've been working on my whole life. It's always been in the back of my mind that it would go this far, but to see it becoming a reality is really exciting."

Bisceglia said the key to reaching the top of the amateur ranks is, not surprisingly, hard work and desire.

"Anybody can do it," Bisceglia said. "It's who wants it most. I got 16th my first year at the nationals. I didn't have a factory ride growing up on 60s and 85s. I had to work for everything I got. Nobody is going to just give you anything, but anyone can earn it. You just have to want it and work hard."

The AMA Youth Motocrosser of the Year was Cobra rider Jet Reynolds. Reynolds, from Bakersfield, Calif., dominated the 51cc (7-8) class and 65cc (7-9) class, winning all six motos. The last rider to win a 51cc and 65cc title at the amateur nationals was Davi Millsaps in 1997.

In the Vet ranks, Dade City, Fla.'s Timmy Ferry claimed the AMA's top Vet honors. Ferry, who finished second to the 2012 AMA Vet Motocrosser of the Year Robbie Reynard in the Vet (35+) class, swept all three motos in the Junior 25+ class to claim that AMA national championship.

A full list of the 2013 champions from the Red Bull AMA Amateur National Motocross Championship is below. For complete results from the week of racing, see www.mxsports.com.

The Red Bull AMA Amateur National Motocross Championship presented by AMSOIL is one of the most diverse national championships in America. It includes classes for riders from 4 years old to 50-plus on motorcycles ranging from 51cc minibikes to state-of-the-art highly modified 450cc motocross machines.

The success of the national championship has produced a long list of AMA Supercross and AMA Motocross superstars. Riders who have progressed through the program include AMA Motorcycle Hall of Famers Jeremy McGrath and Ricky Carmichael, as well as Kevin Windham, Travis Pastrana, James Stewart, Ryan Dungey, Ryan Villopoto and many more.

The AMA Amateur National Motocross Championship represents one of the longest-running motorsports championships in the country. The AMA launched the national championship program in 1975. That year, a series of regional races qualified 135 riders in three classes -- 125cc, 250cc and Open -- for the championship round in Baldwin, Kan. The program evolved over the next few years to include additional classes, with championship finales run in varying locations across the country. In 1982, the AMA partnered with MX Sports and the event moved to its current location at the Loretta Lynn Ranch in Hurricane Mills, Tenn. There, the AMA Amateur National Motocross Championship continues to crown the country's top amateur motocross racers every summer.