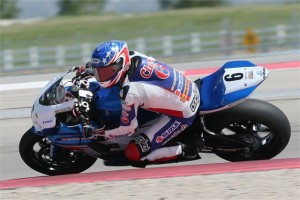 Yoshimura Suzuki Factory Racing's Martin Cardenas celebrated his second AMA Pro Superbike victory of the season and moved up a notch in the overall championship points at Miller Motorsports Park in Tooele, Utah.

Cardenas turned in a stellar performance on his Yoshimura Suzuki GSX-R1000 to bring home the win, while team-mate Chris Clark picked up one of his better finishes of the season with a ninth-place result. Currently, Cardenas is only nine points off the lead in the title chase.

Although Yoshimura Suzuki's Cardenas struggled a bit at the start of the weekend, he went on to finish with fireworks. On Saturday, the Colombian got a good start on his Yoshimura Suzuki GSX-R1000 and turned in a solid ride to finish fourth. On Sunday, Cardenas redoubled his efforts, getting a good start and moving into a podium position almost immediately. As a result, he was in position to capitalize on opportunities and took the win with a few laps to go. 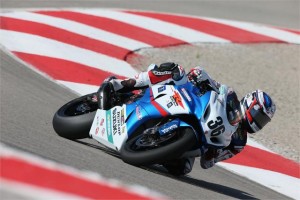 Clark also wrapped-up a solid weekend of sport bike racing, bouncing back from some bad luck earlier in the season. On Sunday, Clark put his head down and raced his Yoshimura Suzuki GSX-R1000 to a respectable ninth place. The day prior, he battled for a top-10 spot for most of the race before bringing home 11th.

"This weekend was a step in the right direction," said Clark. "We found a setup on the Yoshimura Suzuki GSX-R1000 that we like and I feel like I'm getting back up to speed. Unfortunately, we found the right setup a little late in the weekend, so I didn't really have the pace to hold on to the guys in the top five. But I still finished ninth and that's a really positive direction for the rest of the season. Now, I'm going to work on my fitness so I can come back and get some good results at the last two races of the season."