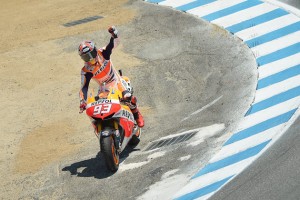 It may have been Marc Marquez's first time racing at the Laguna Seca circuit in California, but that didn't stop him from making motorsports history. The 20-year-old Honda rider became the youngest competitor ever to win back-to-back MotoGP races, as well as the first rookie to notch a victory at Laguna Seca.

The young competitor edged out Stefan Bradl, 2012's Rookie of the Year, as well as Valentino Rossi. These three competitors exchanged leads throughout the race, but Marquez managed to pull off some tricky maneuvers to land in the top spot and stay there, Ultimate Motorcycling reports.

"I am very happy, because we weren't expecting this result from our first visit to Laguna Seca," Marquez said. "I didn't think I would adapt so easily to such a tricky circuit, but from the first day of practice I felt very comfortable and quickly found the best lines."

Marquez extended his lead in the overall MotoGP standings with the win. He now sits 16 points ahead of Dani Pedrosa and 26 points in front of Jorge Lorenzo. Both Pedrosa and Lorenzo were hampered by injuries suffered last week, but managed to rally enough to compete at Laguna Seca, where they finished fifth and sixth, respectively.