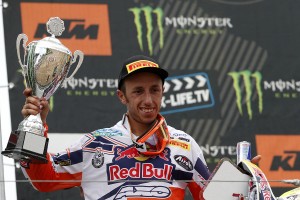 Red Bull KTM rider Antonio Cairoli swept the MX1 Finnish Grand Prix July 14, and teammate Jeffrey Herlings took the victory in the MX2 race. Both riders dominated the two races in their respective classes in this segment of the FIM World Motocross Championship Series, but Cairoli's first race was a close call.

The Italian rider fought his way from fourth place into second, where he spent some time working to pass Clement Desalle of the Rockstar Suzuki team. Eventually, Cairoli edged by Desalle and crossed the finish line a full six seconds ahead. Running on the high of his first victory, Cairoli sped out into first in the second race and held on to the lead. He put a five-second window between himself and second-place rider Kevin Strijbos to secure his 62nd career victory and eighth win of the season.

In MX2, Herlings upheld Red Bull KTM's reputation when he donned his motorcycle gear for his two races. Cycle News reports the Dutch rider took the lead in each race with ease, putting 50 seconds between himself and the rest of the pack by the time be crossed the finish line. This marks his 12th win at the Grand Prix and gives him a 151-point lead over Jordi Tixier, who came in third overall in the MX2 race.