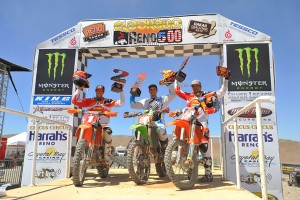 The riders encountered a different type of course than they are used to in the Hare & Hound Series. The McCarran course consisted of one 18 mile loop that the riders repeated three times. It took approximately 55 minutes to complete a lap as the course was very technical and rocky with some large up and downhill sections.

Caselli launched his KTM off to a 2nd place start as the riders charged up the first rocky uphill section. Ramirez was a few spots back in 5th position. As the riders descended the backside of the hill Caselli was able to make a pass for the lead while Ramirez worked up to 3rd. A mile later Caselli lost the lead to Jacob Argubright. Caselli would remain in 2nd position for the remainder of the race to finish on the podium. His teammate Ramirez would hold on to finish 3rd after overcoming a rear brake issue partway through the race.

"This course was slow-paced and very difficult," commented Caselli. "It was easy to make mistakes that could have easily damaged the bike. I played it a little bit cautious today because I was concerned with getting the championship points. I am glad both my teammate and I were able to finish on the podium. We are looking forward to the next round where we can expect the same type of terrain as the normal Hare & Hound races."