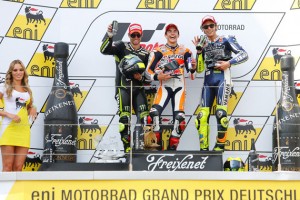 As the MotoGP competitors were heading into the events at Germany's Sachrensing circuit, all eyes were on rivals Dani Pedrosa and Jorge Lorenzo. However, when the two favorites suffered from crashes that injured their respective shoulders, they were forced to sit out of the eighth round of the motorsports series, leaving the door open for one of the other riders to capitalize.

Honda's Marc Marquez was one to take advantage of their absence. The rookie rider led from the start to earn his second win of the season, comfortably beating Cal Crutchlow and Valentino Rossi, who rounded out the podium.

"I am very happy with this victory," Marquez said. "It was important to have a good race under the circumstances this weekend, without Dani [Pedrosa] and Jorge [Lorenzo] on track ... We should be happy, and we have also help up physically at a circuit where there is no time to rest on the bike."

The victory moved Marquez into first place in the overall championship standings. He leads Pedrosa by two points and Lorenzo by nine points, and will look to add to this lead if those riders are out for next weekend's race at Laguna Seca, California.