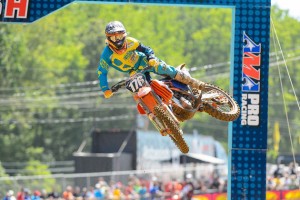 Joey Savatgy is on his way to recovery after sustaining a broken wrist at Budds Creek two weeks ago - Photo: Simon Cudby[/caption]

FMF/Orange Brigade/KTM rider Joey Savatgy is on his way to recovery after sustaining a broken wrist at the sixth round of the Lucas Oil Pro Motocross Championship Series held at Budds Creek two weeks ago.

Since the injury suffered in the second practice session of the event, Savatgy has had a screw placed in his wrist to help the injury heal. He will return to his doctor in two weeks to evaluate the injury and get a more accurate estimate of his return to the motocross series.

"Joey has had an amazing rookie season so far," commented FMF/Orange Brigade/KTM Team Coordinator James Coy. "He won AMA Supercross Rookie of the Year, and most recently was battling inside the top five at the outdoor nationals before his injury. It is unfortunate that this injury occurred in the halfway mark of the season, but we will be here to support him upon his return. He has shown great potential and we will help him get back to racing as soon as he is cleared by his doctor to return to the track."