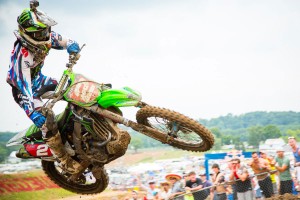 Ryan Villopoto got back to his winning ways this past weekend.[/caption]

Although Ryan Villopoto has been consistently leading the motorsports rankings for AMA Motocross, the past few races haven't been his best. The Kawasaki rider got back to his winning ways this past weekend, however, claiming the victory in the seventh round of the season at the RedBud National in Buchanan, Mich.

Villopoto swept the two motos at the event - the fourth time he has done that this year. He narrowly edged out James Stewart, who came in second in both races.

"We started the season in a very good position [winning the first five motos], but we kind of faded away and now it feels like we're back to where we need to be," Villopoto said, as quoted by Ultimate Motorcycling. "The tracks are getting rougher and the speeds are getting higher and we were definitely pushing the pace pretty hard today."

Villopoto's return to form was no surprise for motorsports fans, but his rival Ryan Dungey's finish was. Dungey was the 34th finisher in the first moto due to a technical failure with his dirt bike. He rebounded well in the second race, but got tangled up in a crash that left him in third place - and more than 40 points behind in the standings.


James Stewart Back On The Box At RedBud AMA MX 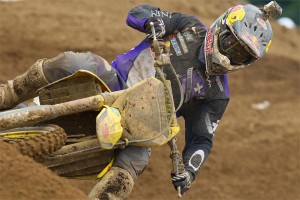 James Stewart turned in a flawless ride over the Fourth of July holiday weekend.[/caption]

The weekend's race saw Yoshimura Suzuki's Stewart celebrate his independence by picking up his first podium finish since the season-opening round. Unhampered by the bad luck that has plagued him much of the season, Stewart got a good start in the first moto and methodically moved through the field, picking off the competition until he finished second. In the day's second moto, Stewart got the holeshot and led several laps before again finishing an impressive second. When the dust had all cleared, Yoshimura Suzuki's Stewart finished second overall for the day.

"I had a great ride today," said Stewart. "Starting with a solid practice to just going faster throughout the day. I haven't been on the podium since Hangtown so it felt good to put the Yoshimura Suzuki RM-Z450 up there again. The first moto went pretty good. I had to come up and pass a few people and as I was settling into third, I inherited second when another rider went down. In the second moto, I pulled the holeshot and led a few laps, but I could tell some other guys had better lines and they got around me. Then I could see their lines and I started closing back up. Then I got into lappers and started losing some time, but overall, the pace was good and I was feeling great out there. It was a big confidence booster and we'll build on this as we take the next week off and then come back for Washougal."

Yoshimura Suzuki Factory Racing's next race is round eight of the 2013 AMA Pro Motocross Championships on Saturday July 20th at the Washougal National in Washougal.

Check out the RedBud "Behind The Scenes Race Report" Video: 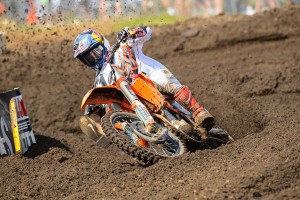 Red Bull KTM Factory rider Ryan Dungey was able to maintain his second place standing in the Lucas Oil Pro Motocross Championship points despite a DNF in the first moto at the seventh round of the series held at Red Bud. His third place result in the second moto coupled with his first moto result earned him tenth overall for the day.

Dungey launched off to a great start in the first moto sitting in third place as the riders rounded the first corner. He remained in third position until the halfway point in the race when he caught and passed Trey Canard to take over second place. He charged forward in second position for the next few laps before a technical issue caused him to not finish the race. As Dungey was not able to get technical assistance on the track, he had to return to the pits for his team to repair his bike and get ready for the second moto.

With a repaired bike, Dungey lined up for the start of the second moto. From a near last place gate pick (based on his first moto result), Dungey was able to salvage a sixth place start. Within the first three corners, he moved into fifth position. On the third lap, Dungey caught and passed Justin Brayton to take over fourth place and then began to chase down Josh Grant who was sitting in third.

Dungey quickly passed Grant and moved toward the battle between James Stewart and Ryan Villopoto for the lead position. Halfway through the race he had caught the two riders and found himself in a battle for the lead. Dungey passed Stewart and began to close in on Villopoto. Dungey continued to push and remained just a bike length behind Villopoto. Then on the two lap mark, Dungey suffered a hard crash where his bike landed on him pinning him under the bike. Incredibly, Dungey recovered from the crash and was able to still finish the moto in third place. The points earned in the second moto allowed Dungey to gain valuable points toward the championship standings.

After the race Dungey commented, "Unfortunately, we just had a tough day. It's part of racing. There was a lot going on out there today and I was pushing hard to get that second moto win. We have a week off now to do our homework and come back stronger for the next round." 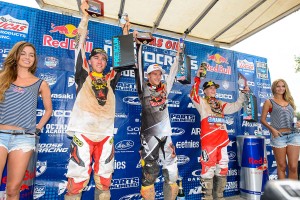 Red Bull KTM Factory 250 Motocross rider Ken Roczen took his second overall victory of the season as he went 2-1 on the day at one of the most popular motocross tracks on the circuit, Red Bud. His teammate, Marvin Musquin, finished fourth overall with 3-4 moto results at the seventh round of the Lucas Oil Pro Motocross Championship Series.

Musquin and Roczen both got off to decent starts when the gate dropped for the first 250 Motocross moto. Musquin was sitting in third position at the end of the first turn while Roczen was a few spaces back in sixth. Roczen quickly charged forward and soon found himself in a battle for second position with his teammate. The two battled for three laps before Roczen made the pass on Musquin to take the position. Roczen went out to pull a 6 second gap on his teammate as he tried to catch the first place ride of Eli Tomac. At the end of the 30 minute plus two lap moto, Roczen crossed the line in second place behind Tomac while Musquin held on for third to round out the podium.

Both riders earned top ten starts at the beginning of the second moto and quickly moved up into the top five. By the fourth lap of the race, Roczen had made a pass on Zach Osborne to take over the lead. He went on to lead the remaining laps of the race to take the win by 7 seconds over Tomac. His 2-1 moto results earned him the overall for the day. This marks Roczen's second overall victory of the season. His teammate, Musquin, rode a solid moto, and despite two crashes near the end of the race, was able to finish fourth overall. His 3-4 results earned him fourth overall for the day.