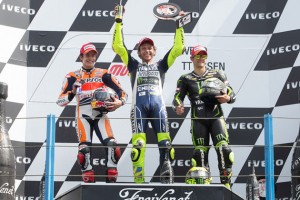 The motorsports world was abuzz before the Dutch Grand Prix kicked off at Assen this past weekend. It appeared that perennial favorite Jorge Lorenzo would be sidelined due to a collarbone injury that required surgery, leaving the door open for another rider to swoop in and grab the victory.

As it turns out, Lorenzo managed to race just 24 hours after the procedure, finishing in fifth place.

"It would have been impossible to believe some minutes after my crash that this could happen," Lorenzo said. "We were brave to make the operation the same day - if I had waited to Friday, the doctors would not have let me race ... This fifth position is better than any victory I have had in my career."

Lorenzo's valiant return couldn't overshadow teammate Valentino Rossi, who claimed victory to earn his first win of the season. The nine-time champion managed to pass all competitors by the sixth lap and closed out the final 20 in the lead. Marc Marquez finished just behind him in second place, while Cal Crutchlow came in third.

Dani Pedrosa finished in fourth place, which was good enough to hang on to the lead in the overall standings. He is now nine points ahead of Lorenzo.