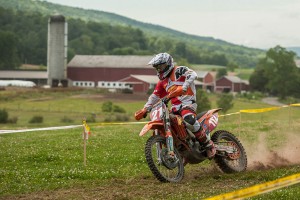 Charlie Mullins added win number six for the year in the Rekluse AMA National Enduro Series at this weekend's Foggy Mountain National Enduro in Blain, Pennsylvania. By doing so, the FMF/KTM rider padded his lead in the motorsports series standings, which new stands at 36 points over Nick Fahringer with just three rounds remaining on the schedule.

Mullins' win in Pennsylvania wasn't quite as easy as he's grown accustomed to, however, as factory Husaberg rider Mike Lafferty challenged Mullins in the rough and rocky terrain. The eight-time national champ won two of the six tests - the first and the fifth - and was just six seconds behind Mullins entering the final test of the day. Mullins was up to the task, however, winning the final test by five seconds over Lafferty, giving him the overall win by an 11-second margin over the Husaberg rider after 65 miles of racing.

"I thought I threw it away in the first test of the day," said Mullins. "I fell three times and I over-shot two corners, which wasn't a good start to the event. We changed the front tire before the second test and I kind of settled down and got back into a groove."

Lafferty was pleased with the runner-up spot, although he would have liked to have won the race.

"At least we know we're on the right track and kind of back in the mix," said Lafferty. 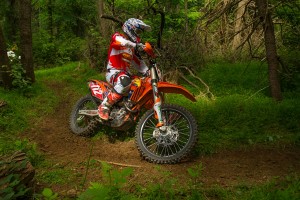 "I never really felt comfortable today," said Fahringer. "I just wasn't feeling that fire until the last two sections. I think I was trying too hard to be smooth at the cost of any kind of aggression. I knew I was behind Jesse at the end and I stepped it up in the final two tests and just barely squeaked by."

Groemm held on for fourth, disappointed at missing the podium.

"I kept it upright all day except for one incident and I think I had a good day overall," said Groemm. "However, I think I was a little too conservative in that final test, I was a little nervous, and I might have given too much away." 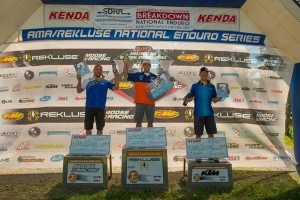 Ryder Lafferty, nephew of Mike Lafferty, claimed his first top-10 national finish with a ninth, while Paddy Holloway did the same on his Radiant AirGroup Racing Husaberg.

The Rekluse AMA National Enduro Series returns to action on July 28 in Cross Fork, Pennsylvania, for the Rattle Snake Enduro. For more info on the series go to www.nationalenduro.com. 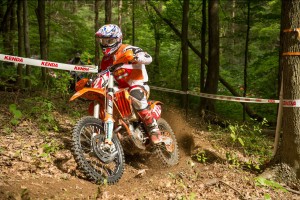 Factory FMF/KTM rider Charlie Mullins earned his sixth win of the season at the seventh round of the Rekluse/AMA National Enduro Series after a tight battle with veteran rider Mike Lafferty.

Mullins struggled in the first test section after he suffered a crash which cost him a lot of time and placed him sixth overall in that test section. He was able to find his rhythm in the second test where he scored the fastest time. He then continued his streak to take the fastest time in the next two test sections.

Heading to the final test, Mullins had pulled himself out of his time deficit and was leading by 6 seconds on Lafferty. "I knew I had to have a great ride in the last section to hold on for the win," commented Mullins. "Luckily, I rode a mistake free test and came out the fastest by 5 seconds."

Mullins time allowed him to take the win by 11 seconds over Lafferty who would finish in the runner-up position. Nick Fahringer went on to finish in third position, followed by Jesse Groemm and KTM support rider Grant Baylor.

"This was definitely a hard fought win," stated Mullins. "Mike always gives me a challenge at the rocky courses and this one was definitely a technical course. I am happy to pull out the win and continue to stretch my points lead prior to the summer break."