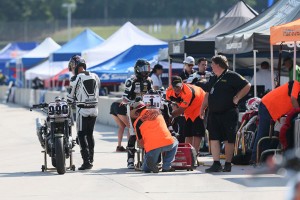 Barnes clocked a 1:35.139 in qualifying while Rapp (who missed the morning's practice after missing Saturday entirely in Wisconsin) posted a 1:35.894 to earn the second spot on the grid.

Barnes said, "We made some changes after this morning. We knew we were quick but we also knew we had more in store and we had to be ready for Rapp again after what he did at Elkhart. We just did our homework on the bike and got it tuned a lot better than before. I just can't thank Spike's Harley-Davidson enough for coming on board and helping us out." 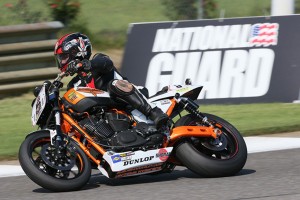 Just as he did at Road America, Rapp missed some early-weekend track time but the veteran runner showed no ill-effects as a result. The Suburban Harley-Davidson star again qualified on the front row and then raced his way into the lead early in the race, ultimately breaking free en route to the checkered flag.

Rapp faced a determined challenge from Spyke's Harley-Davidson's Michael Barnes during the race's opening half. He finally broke the pursuit of the defending class champ on lap 7 and ultimately worked up a 5.454-second margin of victory.

Rapp said, "The guys from Suburban Harley-Davidson -- from the first time I rode the bike, there's just something about it. The way we have it set up and the special things they've done for me as a rider, like handlebars and the seat and stuff like that, it just feels so good I feel like I can ride it a lot harder.

"I started the season with really nothing going on and Joe from Suburban Harley called me and said if I wanted to come out for Daytona we'd at least get one race in. I said 'that'd be great' and it's just kept getting better. If we can get the whole season in, that'd be great. It's been an unexpected welcome, for sure." 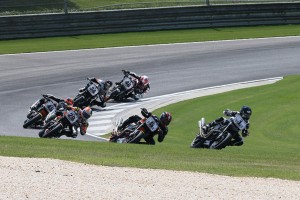 Michael Barnes came home with a clear runner-up finish, another five seconds separating him from the battle that raged for the final spot on the podium - Photo: Brian J Nelson[/caption]

Barnes came home with a clear runner-up finish, another five seconds separating him from the battle that raged for the final spot on the podium.

Harv's Harley-Davidson's Travis Wyman came home a lonely fifth after running with the lead pack in the race's early stages. 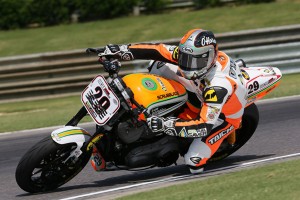 Next Up
The 2013 GEICO Motorcycle AMA Pro Road Racing season will resume on July 12-14 at Mid-Ohio Sports Car Course in Lexington, Ohio for the Buckeye Superbike Weekend presented by Dunlop Tire.

This season's GEICO Motorcycle AMA Pro Road Racing action is being broadcast on CBS Sports Network as part of the CBS Sports Spectacular. Fans can find CBS Sports Network on their TV by using the channel finder at http://www.cbssportsnetwork.com/channel-finder.

In addition to the live broadcasts on CBS Sports Network, AMA Pro Live will be live streaming multiple channels of behind-the-scenes video of the weekend's activities alongside Live Timing & Scoring. AMA Pro Live puts fans in the director's chair, allowing them to choose from a variety of viewpoints including track cameras, paddock cameras and a press conference channel at http://www.amaprolive.com.