Kawasaki Teams Up With 'The Lone Ranger' 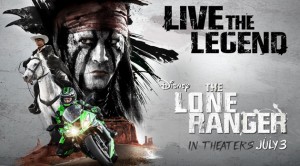 Kawasaki Motors Corp. has teamed up with Disney's upcoming film "The Lone Ranger" for some unique promotions. The motorcycle manufacturer will use movie tie-ins to enhance its "Live the Legend" campaign, which includes machines like the Ninja ZX-6R sport bike, KX450F motocross bike and Teryx4 UTV.

Multiple special edition vehicles will be given away as prizes as part of the promotions, while other pieces of motorcycle gear inspired by "The Lone Ranger" will be available for a limited time. Kawasaki also created a customized Lone Ranger Ninja ZX-6R bike for the film. The machine will be displayed at the movie's premiere, signed by the entire cast and then auctioned off for charity later this year.

Motorsports fans who head to one of more than 1,000 Kawasaki dealerships around the U.S. will also see materials from the film.

"This is an opportunity for Kawasaki to generate a great deal of excitement around product categories that are a perfect fit for the film's characterizations," said Chris Brull, Kawasaki's marketing director. "We appeal to the same type of independent, adventurous, rebellious individuals depicted by the film's stars."