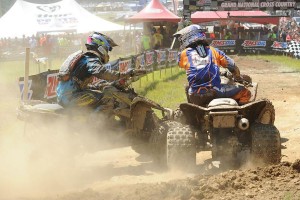 Round 8 of the AMSOIL Grand National Cross Country Series made a stop in Masontown, W. Va. on Saturday, where thousands of fans witnessed a spectacular day of ATV racing. West Virginia's very own Adam McGill bested the current points leader Chris Borich in an exciting battle that came down to the final turns of the Parts Unlimited Mountaineer Run GNCC.

Lonestar Racing/Precision/ITP's McGill put a sizeable gap on the rest of the field by Lap 3, but the Maxxis-backed Suzuki duo of Bithell and Borich closed the gap right away and the three front-runners diced it out for the lead position.

Fowler experienced a crash around the halfway point that caused him to lose sight of the leaders. A second crash set him back a few more positions before eventually making his way into the top five, where he maintained his position throughout the afternoon. 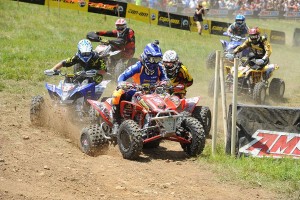 Meanwhile, the three-way battle between McGill, Borich and Bithell began to heat up on the final lap as the trio continued to fight for the lead position. McGill and Borich traded places out front on the last lap but Borich experienced a setback when he got hung up in lapped traffic near the end, losing valuable time to McGill. However, Borich was able to catch the rear wheel of McGill as the duo came into the final turns of the two-hour race side-by-side. In the end, it was McGill who bested Borich in only his second loss of the season.

Bithell came through the finish only five seconds behind to secure a third place finish at the Mountaineer Run GNCC. McClure put in a season-best finish of fourth place just behind Bithell, and Fowler was able to salvage fifth place overall. 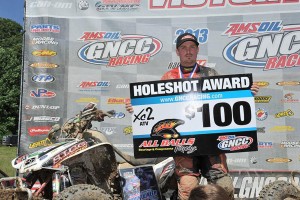 In the XC2 division, rookie Landon Wolfe secured his first career win in the XC2 class following a consistent string of podium finishes this season. It was Indiana's Fred Marley who took the early lead, grabbing the $100 All Balls Racing Holeshot Award in the XC2 class, but Wolfe was right there from the start.

Marley maintained a podium contending position, while Michael Lancaster and Josh Merritt charged to the front of the pack. Merritt was able to make his way into the top three, eventually securing his first podium finish of the season.

Lancaster put in a solid performance to capture fourth place in the XC2 class, while Randy Hamilton rounded out the top five.

Pennsylvania's Cole Richardson was the highest placing amateur of the day, finishing 12th overall to capture the Top Amateur Award. Richardson beat out usual front-runner Marshal Goings and a talented field of young riders in the College A division. 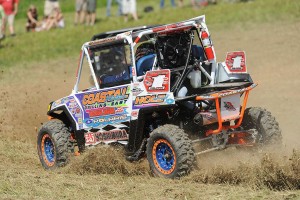 The 2013 AMSOIL Grand National Cross Country Series continues June 29 and 30 for the AMSOIL Snowshoe GNCC at Snowshoe Mountain Resort in West Virginia. For more information on the series, visit www.gnccracing.com. 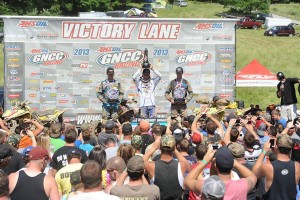 After a hard-fought contest, Chris Borich and Chris Bithell claimed spots on the XC1 Pro podium at Round 8 of the GNCC. Maxxis riders also swept the XC2 Pro Lites podium at the race, held June 15 in Masontown, West Virginia.

Both Borich and Bithell started in the top five of what quickly became a three-man race, with the two Maxxis-sponsored riders battling through to the finish line with another racer. Borich was second across the finish line, with Bithell third. "It was real rocky and muddy," said Borich. "All in all, the tires worked great. Everywhere that it was rocky and slick, I was able to get great traction."

Walker Fowler's fifth-place finish was a remarkable achievement, coming despite two crashes in the second half of the race. Borich continues to lead XC1 Pro standings, with Bithell in third place and Fowler in fourth. 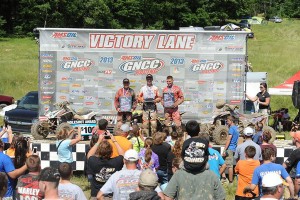 In XC2, Landon Wolfe, Josh Merritt and Fred Marley took the top three places on the podium, after Marley grabbed the holeshot for the class. The victory was the second GNCC XC2 win of Wolfe's career. "West Virginia has some of the toughest terrain to get through, and my Maxxis Razr's hooked up perfect all day to keep me out front," said Wolfe. "There were also a lot of sharp rocks that could have very easily torn a tire to shreds." Points leader Brycen Neal took tenth place for the class. Wolfe and Marley are second and third in SC2 points, while Merritt is seventh.

A Maxxis rider snared a victory in the morning race when Michael Swift won the U2 race for third overall on the a.m. podium. With five class victories this season, Swift is just three points away from first place overall for U2.

Maxxis congratulates and thanks all of its riders for their outstanding performances.