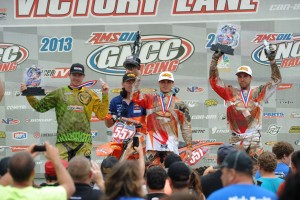 Heavy rainfall leading up to Sunday's Parts Unlimited Mountaineer Run GNCC made for slippery track conditions at Round 8 of the AMSOIL Grand National Cross Country Series. However, despite the difficult terrain conditions, the 1 p.m. afternoon dirt bike race boasted some of the most exciting race action of the 2013 season. Kailub Russell dominated the three-hour competition, capturing his second-straight victory of the season, where he closed the gap to less than ten points behind Charlie Mullins in the National Championship standings. In the XC2 Pro Lites class, defending champion Jason Thomas used his veteran knowledge to best his rookie competition as he secured his first win of the season.

Defending National Champion Paul Whibley battled it out with his AmPro Yamaha teammate Jordan Ashburn right off the start, where the duo went nearly side-by-side through the All Balls Racing XC1 Holeshot line, but Whibley once again went home with the $250 prize. Ashburn wasn't able to brake for the slick corner, causing the Tennessee native to go down, where he began the race in the back of the pack.

Factory FMF/KTM's Russell also got hung up in the first two turns, entering the woods in nearly last place. However, Russell immediately began picking off riders on the opening lap. By the end of Lap 1, Russell had passed through the entire XC1 field where he put nearly ten seconds on the second place of FMF/RPM/KTM Team Maxxis rider Rory Mead. Just behind Mead was Whibley, FMF/KTM's Mullins, Rocky Mountain ATV/MC's Josh Strang and Shenandoah Honda/USWE-Sports.com's Thad DuVall, all fighting for an early position up front. 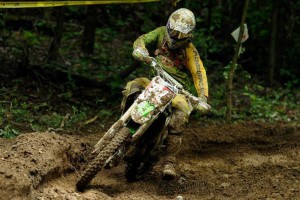 As DuVall made his way inside the top five, the West Virginia native experienced mechanical issues that would later send him pushing his bike back to the pits. DuVall's crew made some adjustments to the bike and he was able to return to the race but the machine ended up giving out once again. After two full laps of competition, DuVall was forced to sit out the remainder of his home state GNCC due to a mechanical issue.

Meanwhile, Mullins made his way into the second place position with Strang and Carolina KTM/RidePG.com's Chris Bach close in tow. As the race wore on, Mullins began to lose ground on his teammate Russell and on the white flag lap Bach made the pass on Mullins to take over second place. At that point, Strang had dropped back to the fourth place position but less than five seconds separated all three riders heading into the final lap of the three-hour race.

Bach ran into some issues getting through lapped riders, giving Strang the opportunity to take over the second place position. Bach's last lap misfortune arguably cost him the podium position at Round 8 but the Indiana native was able to hold onto fourth place for the day, salvaging championship points.

In a dominant fashion, Russell secured his second straight victory of the season at the Mountaineer Run GNCC, where he now sits just eight points behind Mullins in the overall standings. Strang finished out strong with a second overall, while Mullins held on to take a third place position for the day. 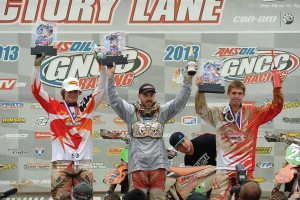 Despite riding through injury again this weekend, Whibley was able to salvage a fifth place finish for the day. Ashburn finished sixth, while Litz Racing Honda's Takeshi Koikeda came in seventh.

In the XC2 class, it was New Jersey's Billy Schoeneberg who grabbed his first-ever $100 Digitaloffroad.com Holeshot Award but it didn't take long for Pennsylvania's Michael McGinnis to put himself out front. McGinnis led the opening lap before West Virginia native Layne Michael jumped out front on Lap 2.

DirtWise Schools/KTM-Parts.com/Maxxis rider Jason Thomas then took his turn to lead the seven-lap race. From there, Thomas didn't look back as maintained a one-minute-plus lead throughout the second half of the race.

KTM Support rider Grant Baylor got caught up in a second corner pile up and the young gun was forced to make his way through the pack all afternoon. Baylor eventually caught the rear wheel of F.A.R Husky's Nick Davis and Morgantown Powersports-backed Layne Michael where he applied the pressure. Davis experienced a mechanical issue after the halfway point that left him out of podium contention and Michael and Baylor were left to battle it out for the second place position. 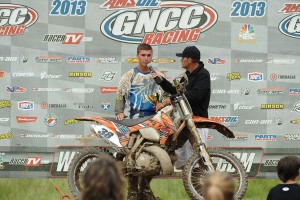 Experience prevailed after three hours of racing as defending champ Jason Thomas captured his first win of the season, closing the gap on the points leader. Baylor's second place finish allows him to maintain the points lead heading into Round 9 in two weeks, while Thomas sits second in the class standings and Andrew DeLong holds the third place position, despite missing the last two rounds due to injury.

The 2013 AMSOIL Grand National Cross Country Series continues June 29 and 30 with the AMSOIL Snowshoe GNCC. For more information on the series, visit www.gnccracing.com. 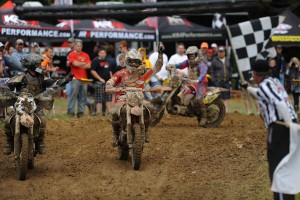 Factory FMF/KTM rider Kailub Russell took his third win of the season at the eighth round of the GNCC Series while his teammate and current points leader, Charlie Mullins, joined him on the podium with a third place result.

Russell and Mullins both got caught in a first corner pile up at the start of the race. Mullins was able to go around the outside of it avoiding a crash but still found himself at the tail end of the pack while Russell collided with another rider and was further back once he recovered.

Despite the tough start, the two teammates quickly charged forward making multiple passes in the first few miles to move into the five. By the end of the first loop, Russell had moved into the lead while Mullins was sitting in fourth.

It wasn't long before the teammates were in the top two positions and began to pull away from the pack. On the fourth lap of the race, Mullins suffered a hard crash down a hill, twisting his knee in the process. He collected himself and reentered the race still in second position, but was now dealing with quite a bit of pain in his knee. He pushed as hard as he could to try and hold his position. With a lap to go, he lost one position to Josh Strang. 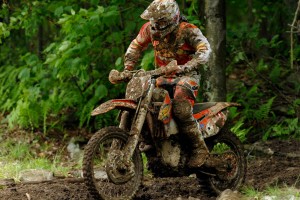 Out front, Russell crossed the checkered flag to take his third victory of the season. Strang followed in second place roughly three minutes back while Mullins was just seconds behind him to round out the podium. Heading to the ninth round, Mullins still holds the championship points lead by five points over his teammate.

The XC2 Pro Lites class was won by Jason Thomas who took the victory over KTM support rider Grant Baylor and local KTM rider Layne Michael. The three KTM riders made it a podium sweep for KTM. Now eight rounds into the series, Baylor holds the points lead by 14 points over Thomas.

Factory FMF/KTM rider Maria Forsberg was very comfortable on the muddy and slick course. She took the win in the women's class by 6 minutes over fellow KTM rider Kacy Martinez. The two ladies are now tied for the lead in the point standings. Forsberg's finishing time also placed her second overall in the morning class podium.