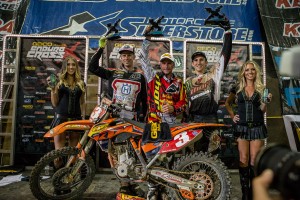 Mike Brown kept his streak going at round two of the 2013 GEICO AMA EnduroCross series, fueled by Monster Energy and presented by Lucas Oil inside the Sleep Train Arena in Sacramento, California. The FMF KTM rider had a nearly perfect day by setting the fastest time during the daytime hot laps, winning his heat race and finishing a close second in the night time hot laps before leading every lap of the main event. "I have started the season really well but there is still a long ways to go for the championship" Brown said. "But this is like getting the holeshot on the season".

Monster Kawasaki's Taylor Robert was a very close second in the main event and kept the pressure on for the entire main event. He ate a lot of roost off of Brown's rear wheel and eventually had to remove his goggles. "I just could not see because Brown was roosting me every lap when we exited the water hole."

The battle for third was intense as RPM KTM's Kyle Redmond held the spot for several laps before giving way to Husqvarna's Cory Graffunder. Then Graffunder came under intense pressure from Taddy Blazusiak and Colton Haaker, who had both moved through the pack after going down on the start. Haaker passed Blazusiak and made a last lap pass attempt on Graffunder and went down in the firewood pit. Graffunder held the final podium spot, Blazusiak passed the downed Haaker for fourth and Haaker recovered for fifth. 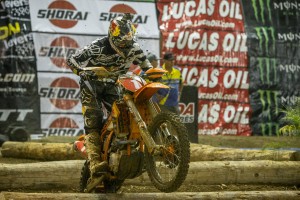 Brown now has a perfect 50 points to hold the GEICO AMA EnduroCross series lead ahead of Blazusiak with 40 and Robert is third with 37.

The Women's main event was intense and sixteen year old Lexi Pechout took her first ever EnduroCross win. She was followed closely by fellow Canadian, Chantelle Bykerk. Rachel Gutish led all but the last lap before getting stuck in the firewood pit and dropping back to third.

The GEICO AMA EnduroCross series will take a summer break and resume action on Saturday, September 21st at the Citizens Business Bank Arena in Ontario, California. In the meantime, most of the top Expert and Female riders will compete in the two X Games events taking place during the break. The first of those will be held in Munich, Germany in less than three weeks on June 30th followed by X Games Los Angeles on August 4th. 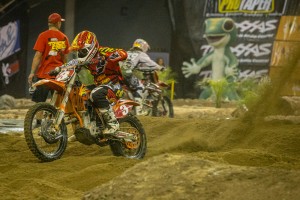 The 41 year-old topped the board early in the evening when he turned the fastest lap time in the practice session. He followed up with the fastest afternoon qualifying hot lap time to earn the first gate pick in the opening heat.

He pulled a great start in his heat to go on and take the win. Red Bull KTM Factory rider and the reigning EnduroCross Champion, Taddy Blazusiak, followed suit and took an easy win in the second heat aboard his KTM machine.

In the main event, it was Brown who leaped out front and grabbed the holeshot as the riders rounded the first corner. He went on to lead all laps to secure his second win of the season and maintain the points lead. Unfortunately, Blazusiak suffered a crash in the first corner and spent the remaining laps coming through the pack. He was able to fight his way back to 4th, just one spot off of the podium.

"I am really excited I was able to grab another win," stated Brown. "I have been working very hard over the past couple of years to improve in this series, and I am happy it is all paying off." 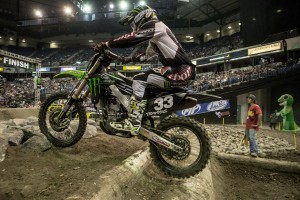 After a month-long break since the opening round of the AMA EnduroCross Series, Round 2 took place at Sleep Train Arena in Sacramento, Calif. Monster Energy Kawasaki's Taylor Robert kicked the night off with a runaway win in his heat race to transfer to the main event. He got a great start in the main and stalked the leader for the entire 15 lap race to finish a close second. Teammate Justin SoulÃ© put in the second fastest hot lap in qualifying and finished second in his heat race as well. In the main event a few mistakes on the first lap dropped him back in the field, but he fought hard to finish eighth.


Back on the Box

Robert has shown the speed to win races since the start of the EnduroCross season. After two X Games and one round of AMA EnduroCross, Robert put the pieces together in Sacramento. Robert easily won his heat race and threw down a very fast hot lap to be awarded third gate pick for the main event. He got a clean start out of the gate and began his chase for the leader. Robert sprinted early to stick on the rear wheel of the leader and the two of them gapped the field immediately. He looked for an opportunity to make a move for the lead but crossed the line in second to secure his first podium of the season.

"The track was really fast and wasn't that technical," said Robert. "There was nothing to separate guys so you were pushing the whole time. Mike Brown and I had similar lines; I was faster than him on half the track, and he was faster on the other half. I would catch him every lap right before the sand pit and he would roost me every time. I ran out of tearoffs, but still finished right on him." 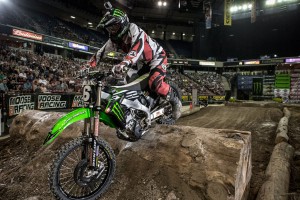 A few mistakes on the first lap dropped Justin Soule back in the field, but he fought hard to finish eighth - Photo: Drew Ruiz[/caption]

SoulÃ© was confident heading into Round 2 after logging more hours on his KX250F than before the opening round. Although not known to have a blazing fast hot lap, SoulÃ© set the second fastest hot lap to start the night off which he backed up with a second place finish in his heat race. In the main event, SoulÃ© rounded the first corner within the top five but a few mistakes on the opening lap dropped him back. From there he worked his way into eighth place and although he was riding smooth and fast, the basic track made it tough to make up time.

"It was really tough to pass out there," said SoulÃ©. "You had to wait for a mistake because there was only one really fast line and everyone was taking it. But I'm happy with my riding even though the results don't show it. I started this season with a different mindset. I feel good about the bike and I've been focusing on the task at hand instead of worrying about points or position and it's been working for me."

The AMA EnduroCross Series takes a break for the summer, but Robert and SoulÃ© will head to Munich, Germany for X Games EnduroX. While Robert has competed at each X Games event this year, SoulÃ© will join his teammate for the two remaining events in Munich and Los Angeles. X Games Munich kicks off June 27th with EnduroX taking place June 29th.

Hard-fought third-place finish for Husqvarna and Graffunder at round two of the GEICO AMA EnduroCross series in Sacramento, CA 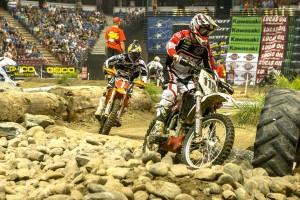 Cory Graffunder (118) manages to keep his TXC310R ahead of Taddy Blasuziak to capture third place in Sacramento - Photo: Drew Ruiz[/caption]

Factory Husqvarna's Cory Graffunder hit the road for round two of the GEICO AMA EnduroCross series with one thing on his mind - podium. After starting the season with a modest seventh-place finish at the opening round, Graffunder was determined to improve his results, and he was able to do just that with a third-place finish, on the podium, at the Sleep Train Arena in Sacramento, California.

The battle for third in the main event turned out to be an intense one. Graffunder had his hands full getting around his former teammate, Kyle Redmond, who held third for much of the main. Cory then had the challenge of fending off a hard charging Taddy Blazusiak for the final podium position. Graffunder proved to be unstoppable on his factory Husqvarna TXC310R, and would not be pressured into making any mistakes.

"I felt great all night and I'm thrilled to get on the podium," Graffunder said. "I knew I had the speed to be up here with these guys, and it finally all came together. My Husqvarna TXC310R is running great and I'm really pumped to get it on the podium."

Cory now looks forward to another international X Games EnduroX event - this time in Munich, Germany - where he hopes to capture another X Games medal.