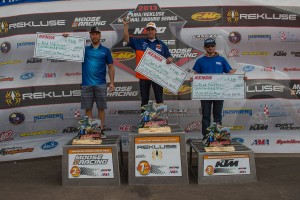 Charlie Mullins inched closer to capturing the second national enduro title of his career by claiming an impressive motorsports win at the Loose Moose National Enduro this weekend, just miles from the beautiful southern coastline of Lake Superior at round six of the Rekluse AMA National Enduro Series in Marquette, Michigan.

From the get-go Mullins laid the throttle back on his FMF/KTM, navigating the sandy and technical trails of Michigan's upper peninsula with grace and speed. In all, the 2010 series champ won five of the six tests and finished out the race a tick over two-minutes faster than the next fastest rider.

With the win Mullins stretched his lead in the to 27 points in the series standings with four races left on the schedule.

Nick Fahringer claimed second overall, adding to his string of podium finishes. The Radiant AirGroup Racing Husaberg rider was sitting third behind Obermeyer Yamaha/Raines Riding Academy/OffroadViking.com's Brad Bakken heading into the sixth and final test, but a strong final push by Fahringer coupled with a tip-over by Bakken moved Fahringer into second place at the end of the day. 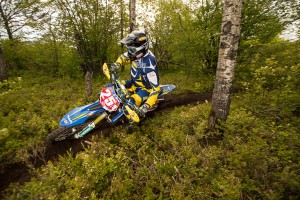 Mike Lafferty switched back to a two-stroke for the Michigan race and took fourth overall - Photo: Shan Moore[/caption]

Bakken rounded out the podium in third, and was the only rider all day to top Mullins in a test, having won the relatively fast fourth test.

Eight-time national enduro champ Mike Lafferty switched back to a two-stroke for the Michigan race and took fourth overall, the factory Husaberg rider finishing a minute-and-a-half ahead of Am Pro Yamaha's Jesse Groemm in fifth.

KTM's Grant Baylor headed up the second half of the top 10, finishing sixth ahead of Colorado KTM rider Ian Blythe.

The Rekluse AMA National Enduro Series takes a short one-week break before resuming action on June 23rd in Blain, Pennsylvania, for round seven of the series. For more information on the series check out www.nationalenduro.com. 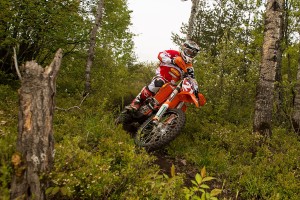 Factory FMF/KTM rider Charlie Mullins earned his fifth win of the season at the sixth round of the Rekluse/AMA National Enduro Series after capturing five of six special test wins to take the overall victory.

Now six rounds into the series, Mullins holds a 27 point lead in the championship standings. The riders will now take a two week break until the seventh round to be held on June 23, 2013 in Blain, PA. 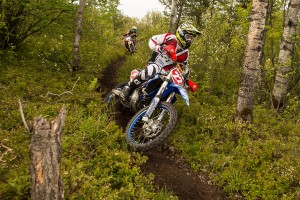 Fahringer finished inside the top three in five of the six tests to boost himself onto the podium at the end of the day. "I struggled in the first section with some bike set-up issues," commented Fahringer. "The terrain is so diverse out here it was hard to determine which type of tire I should run and I had to make some adjustments going into the second and third tests. My scores started improving once I got everything sorted and I was able to come in strong at the end."

Fahringer ended the day with two 2nd place finishes in the final two sections to pass Brad Bakken to takeover 2nd place for the day. His overall result moved him to 2nd place in the point standings.

Lafferty also saw an improvement in his results as the day progressed. He started off slow but came on strong in the final few tests to take home 4th place. Russell Bobbitt, who was sitting 2nd in points prior to the race, was unable to participate in this round after he suffered a bad practice crash earlier in the week. He is currently healing up from his crash and will continue to be evaluated to determine when he can return to the series.

Husqvarna riders were in action at the Loose Moose National Enduro in Marquette, Michigan, where Craig DeLong and JD Friebel topped the podium in the A 250 and A Open classes, respectively. DeLong's win was made sweeter by cracking into the top-ten by the day's end.