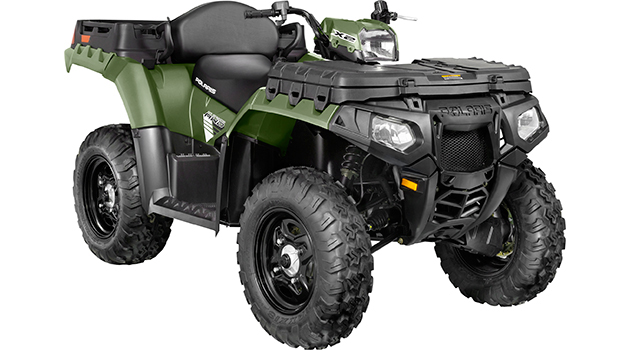 Although I primarily use my ATVs for recreational purposes, I have plenty of friends who take advantage of their four-wheelers to get things done around a property. The right machine can handle any kind of heavy-duty chores you want to throw at it, but not every ATV has what it takes to double as your go-to for work and play. If you're looking for a four-wheeler that easily serves in any way, you'll want to consider the 2013 Polaris Sportsman X2 550. 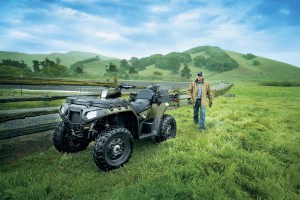 The 2013 Polaris Sportsman X2 550 is an appealing machine for anyone who needs their ATV for both work and play.[/caption]

Like the name implies, the Sportsman X2 was designed to appeal to the adventurous rider. Its single-cylinder, liquid-cooled, four-stroke engine operates with a displacement of 549cc.

The powerful machine proves its worth when you need it for towing. In addition to its 520-pound racking capacity, the ATV can easily pull 1,500 pounds - more if there's an unbraked trailer involved. Another 120 pounds can be carried on the front rack. If you're just trying to store your gear for long rides, you can access the 8.2-gallon storage compartment located on the front of the Polaris machine, which offers just the thing needed to keep accessories out of the elements. 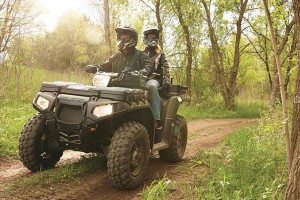 Like the name implies, the Sportsman X2 was designed to appeal to adventurous riders.[/caption]

Like many other Polaris models, the Sportsman comes equipped with on-demand all-wheel drive and rear-wheel drive, as well as VersaTrac Turf Mode, which unlocks the rear differential and allows you to go easy when traversing sensitive areas. There's also Active Descent Control working with the hydraulic disc brakes to provide expert handling on steep inclines.

Another feature I liked is the extra lighting. To go along with the two lights located on the front bumper, there's one mounted on the handlebar pod. When all three are working, you have 150 Watts of power to light the way, whether you're trying to navigate through unknown woods or in rough weather.


Final Thoughts - Many Uses, One ATV 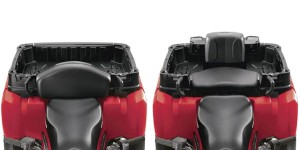 The rear dump box can act as a loading bed, but in just seconds it turns into a seat for passengers.[/caption]

One of the best features about this Polaris ATV is its rear dump box. Not only can it act as a loading bed if you're trying to haul things around, but in just seconds it turns into a seat for passengers. With a seat height of 35.8 inches, you'll have plenty of clearance for going over all types of terrain and dealing with any obstacles in your way.

Ultimately, the 2013 Polaris Sportsman X2 550 is an appealing machine for anyone who needs their ATV for both work and play.