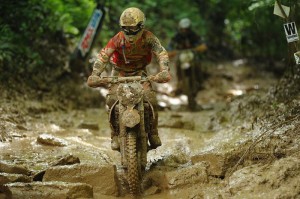 Kailub Russell closed the gap on points leader Charlie Mullins after taking the win at Round 7 - Photo: Ken Hill[/caption]

The 2013 AMSOIL Grand National Cross Country Series took to Sunday Creek Raceway in Millfield, Ohio on Sunday for the 23rd running of the Wiseco John Penton GNCC. The National Championship title chase became much more exciting as Kailub Russell inched his way toward points leader Charlie Mullins by securing his second motorsports victory of the season in his home state of Ohio. Rookie Grant Baylor outlasted his veteran competition, taking his second win of the season in the XC2 class.

AmPro Yamaha's Paul Whibley grabbed yet another $250 All Balls Racing XC1 Holeshot Award but the Factory FMF/KTM duo of Mullins and Russell put themselves out front on the opening lap. Shenandoah Honda/USWE-Sports.com's Thad DuVall made his way past the defending champ Whibley, where he began his battle with Russell and Mullins in the lead pack.

Whibley battled early on with Rocky Mountain ATV/MC's Josh Strang and AmPro Yamaha teammate Jordan Ashburn before inserting himself into the lead position just before the halfway point. There were several lead changes throughout the seven-lap race and it didn't take long for Russell to reclaim the lead around Lap 4. From there, Russell and Mullins took command of the race, where the KTM duo eventually rode to a 1-2 finish for the day. 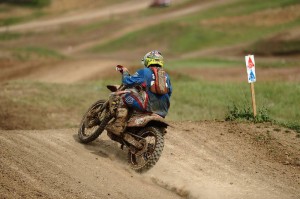 While running in podium contention, DuVall experienced issues with his rear shock that ultimately dropped the West Virginia native in the running order. DuVall's pit crew made the decision to pull him into the pits and replace the shock, where he finished ninth place in the XC1 class and 15th overall.

Strang took advantage of DuVall's misfortune, putting himself into podium contention at the end of the three-hour race. Strang was able to hold on for third, while Whibley came through in fourth and Carolina KTM/RidePG.com's Chris Bach rounded out the top five overall.

Mullins and Russell top the National Championship standings after seven rounds of racing, while DuVall and Bach sit in third and fourth place respectively.

The championship chase for the XC2 Pro Lites class became much more interesting as rookie Grant Baylor secured his second win of the season and the all-new points lead after Round 7. Coming into the John Penton, F.A.R Husky's Andrew DeLong injured himself in a pre-race affair, causing the previous championship contender to miss the Ohio round on Sunday. 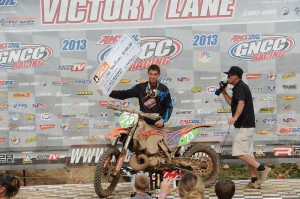 With DeLong out, several XC2 competitors looked to find a place atop the podium, including Morgantown Powersports-backed rider Layne Michael, who secured his first-ever $100 Digitaloffroad.com Holeshot Award to take the early lead. But it was DirtWise Schools/KTM-Parts.com/Maxxis rider Jason Thomas who claimed the lead on the opening lap and the defending champ led until Lap 4 when he experienced issues that ultimately took him out of the race.

DeLong's F.A.R Husky teammate Nick Davis, who charged through the pack after getting a tenth place start, moved his way into podium contention. Davis battled it out for the second place position with West Virginia's Zach Nolan and Pennsylvania's Michael McGinnis throughout the afternoon, where he eventually prevailed to secure a season-best second place finish in the class. Nolan was able to hold off McGinnis to take his second podium finish of the season with third place. 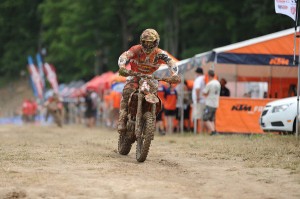 Kailub Russell took the win at the John Penton GNCC to clinch his second victory this season - Photo: Harlen Foley[/caption]

Factory FMF/KTM rider Kailub Russell took the win at the John Penton GNCC to clinch his second victory this season while his teammate, Charlie Mullins, joined him on the podium in 2nd place.

In typical fashion, the two KTM riders battled throughout the three-hour race pulling a large gap on the rest of the field. Russell took over the lead on the second lap with Mullins in tow. On the last lap, Russell had an approximate 20 second cushion over Mullins when he crashed on a downhill. Mullins quickly caught Russell while he was recovering from the crash but then got hung up on the next hill allowing Russell to move back into the lead. From there, Russell rode it home for the win while Mullins came in just a short distance back in 2nd.

"I have always liked this race," remarked Russell. "It is always challenging. You never know what the weather will bring. Today was some of the best conditions I have seen at this track and I had a lot of fun."

KTM had further success in the XC2 Pro Lites class where the rookie, Grant Baylor, earned his second consecutive win of the season. On top of that, KTM also finished 1st and 2nd in the Women's class with Factory FMF/KTM rider Maria Forsberg taking the win and RPM/KTM rider Kacy Martinez finishing 2nd.


FAR Husqvarna On The XC2 Podium At John Penton GNCC 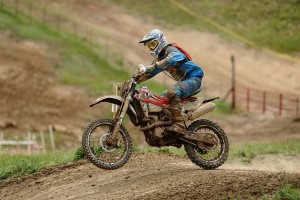 FAR Husqvarna's Nick Davis battled through the muddy conditions to end the day in second place in the XC2 class - Photo: Ken Hill[/caption]

The Fred Andrews Racing Husqvarna team celebrated another podium in the 2013 GNCC Series, only this time it was Nick Davis' turn. The young rider showed his mettle at the John Penton GNCC by riding to a career-best second-place finish in the XC2 class.

Steady rain on Saturday night threatened to make the Millfield, Ohio race a mud fest, but sunshine on Sunday dried the terrain out enough to make it what racers called "one of the best John Penton races in a long time." Nick got out to rough start after a crash shortly after the start, but he got back on his Husqvarna TXC250R and charged his way through the pack. He held a solid second place heading into the last lap, with over a one-minute buffer over third, but nearly lost it after getting stuck.

"I rode great all day until the last lap," Davis said, referring to the incident that temporarily cost him a position. Nick approached one of the many rutted-out hill climbs and found it littered with other riders stuck in the mud. Davis didn't make it on his first attempt, and got stuck again on his second attempt. He finally resorted to pushing his bike up the hill, which allowed the third-place rider Zach Nolan to catch up. 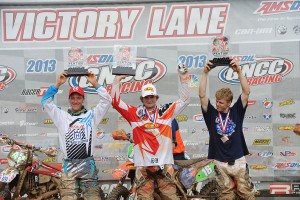 "I really needed to step it up at that point," Nick commented. "I worked really hard to get [Zach] back, and I passed him with a few miles to go and pushed hard all the way to the finish."

Christopher Douglas made it two Husqvarna's in the top-ten of the XC2 class with a seventh-place finish. Davis' FAR Husqvarna teammate Andrew DeLong was unfortunately unable to race due to a hand injury suffered during the week.