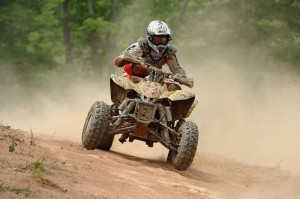 Chris Borich took his sixth win of the season at the John Penton - Photo: Ken Hill[/caption]

Round 7 of the AMSOIL Grand National Cross Country Series made a stop in Millfield, Ohio for the 23rd running of the Wiseco John Penton GNCC. Chris Borich returned to his winning ways on Saturday, making a last lap pass on Adam McGill to secure his sixth win of 2013.

Eric Hoyland began his day by grabbing the $250 Team Woodhead/DeRisi Racing XC1 Holeshot Award ahead of a stacked field of riders. It didn't take long for the veteran front-runners to take the lead, beginning with Lonestar Racing/Precision/ITP's Adam McGill, who crossed the line in first on the opening lap. Borich put his Maxxis-backed machine right behind McGill, while Reliable Tool Supply/Maxxis' Chris Bithell, BNR's Kevin Yoho and JB Racing/Can-Am's Jarrod McClure followed close behind.

AmPro Yamaha's Walker Fowler and HMF/GBC/Yamaha's Johnny Gallagher didn't get a start out front but the Yamaha-backed duo quickly made their way through the pack. Fowler caught up to the leaders, where he engaged in a battle for a podium position with Bithell, Borich and McGill. A podium finish was in the cards for Fowler until he ran out of gas on the final lap, where he ended up finishing fourth overall for the day. 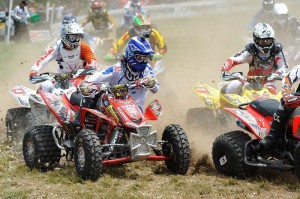 Although McGill led the most laps of the afternoon, it was Borich who secured the overall win with his patented last-lap pass. McGill's second place finish was a breakthrough ride, as it matched his season-best second place at the opening round. Bithell's consistent season continued as the Pennsylvania native secured a third place overall finish.

Borich continues to lead the overall standings after six rounds of racing, while Fowler sits in second place. Bithell is close behind for third and then it's McGill and Yoho rounding out the top five overall in the overall National Championship standings. 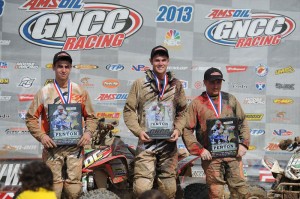 In the XC2 division, it was once again Brycen Neal who came out victorious at the John Penton GNCC. After missing the last round due to injury, Landon Wolfe secured an impressive second place finish in Ohio. Indiana's Fred Marley secured yet another podium finish behind the rookies, giving him a solid fourth place in the class standings. Additionally, Marley kicked off the day by grabbing the All Balls Racing Holeshot in the XC2 class, taking home an extra $100.