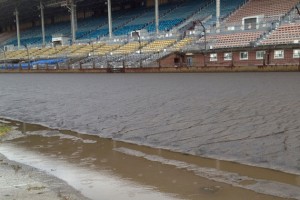 The AMA Pro Flat Track presented by J&P Cycles race scheduled to run on Sunday, May 26, 2013 at the Springfield Mile has been postponed due to inclement weather.

Officials from AMA Pro Racing and the Illinois Motorcycle Dealers Association (IMDA) announced that the motosports event, which was scheduled to take place at the Illinois State Fairgrounds in Springfield, Ill., has been rescheduled for August 31, 2013 in what will be a Labor Day weekend doubleheader of Grand National Championship racing, as the second running of the Springfield Mile will take place the following day on September 1.

In addition to the two Grand National Championship races set to be held this fall, the IMDA will be running an amateur Short Track on Friday, August 30, 2013. For additional information, please visit the IMDA's website at http://www.illinoismda.com/.