Andrew Short To Be Recognized By Motocross Museum Tour 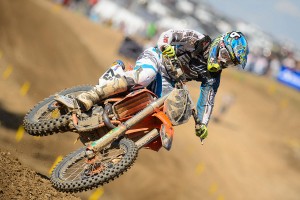 Not only was Donnie Hansen a national Supercross, Motocross and MX des Nations champion, but an important part of our motocross DNA. After his lucrative racing career Donnie went on to become a coach and trainer, and has made an impact on countless competitors in our sport. This weekend, during the Lucas Oil Pro Motocross Championship in Thunder Valley, Colorado, Donnie Hansen will present the Legends and Heroes award to one of those he mentored, Andrew Short.

Short is a veteran top competitor in the Pro Motocross ranks, and throughout his racing career the Colorado native has demonstrated boundless talent and determination. His ability to persevere is evident by his actions this past year, regaining momentum as a fan favorite on his BTO KTM. Andrew, also known as "Shorty",Â is recognized as one of the "good guys"Â of motocross, always willing to take time for his many appreciative fans and supporters. His humble demeanor is predominantly due to the fact that Shorty had to fight his way to the top, and he truly values everything that he's accomplished.

Join The Legends and Heroes of Motocross Tour this Saturday, May 25 in Thunder Valley, Colorado where Donnie "Holeshot"Â Hansen, will present this notable award to Andrew Short.


About the Tour
The Legends and Heroes of Motocross Tour is a professional historical display and timeline of America's greatest motorsport. The tour includes the machines and the champions of motocross. The project was conceived by a dedicated group of motocross enthusiasts who, over the years, have discovered the value of the rich 40+ years of motocross legacy and its impact on American motorsports. "The dedication and passion of the sport has brought the Legends and Heroes of Motocross Tour to the next level of sharing this legacy, the history of the machines and men and women of motocross.

Source: Legands And Heroes Of Motocross