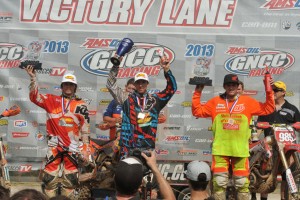 Following some of the muddiest race conditions the series has seen in recent history, the 2013 AMSOIL Grand National Cross Country Series experienced picture perfect weather and track conditions on Sunday for the Dunlop Limestone 100 GNCC. After three hours of intense battle, Charlie Mullins extended his points lead over the field by capturing his fourth win of the season at Round 6 of the 13-race series.

The AmPro Yamaha team got off to another great start, first with Paul Whibley securing the $250 All Balls Racing XC1 Holeshot Award and then it was Jordan Ashburn who grabbed the early lead. Ashburn held the lead through Lap 1 but it didn't take long for the Factory FMF/KTM duo of Mullins and Kailub Russell to put themselves out front. Just when it appeared to be a two-way battle for the win, Shenandoah Honda/USWE-Sports.com's Thad DuVall entered himself into the chase. Around the halfway mark, DuVall broke up the KTM teammates, riding in the second place position behind Russell until Mullins made the move past both riders to reclaim the lead with two laps to go.

Whibley dropped back a few spots after claiming the XC1 holeshot, but the defending champion kept the lead group in his sights early on. Whibley experienced a few struggles mid-race but the Axe Man put a late-race charge on the competition in order to earn fourth overall for the day. Suffering from a wrist injury at the start of the season, Whibley's Round 6 ride proved to be a big step in the recovery process as fourth place marks his best finish of the 2013 season, in addition to the fourth place he earned at the season opener. 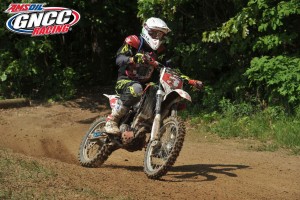 Ashburn dropped outside of the top five after leading the early part of the race, finishing seventh overall for the day. XC1 rookie Adam Bonneur bested Litz Racing Honda rider Takeshi Koikeda for eighth and Ricky Russell rounded out the top ten.

Mullins, DuVall and Russell continued to battle all afternoon but it was the 2011 champ Mullins who pulled through in the end. Russell claimed second place, while Duvall earned third place to further validate the West Virginia native in the 2013 title chase.

The championship chase for the XC2 Pro Lites class became much more interesting as defending champ Jason Thomas reclaimed the points lead in the class after scoring valuable points with a second place finish, while F.A.R Husky's Andrew DeLong finished just inside the top ten despite leading the most laps of the race.

But perhaps most of the excitement lies in KTM support rider Grant Baylor, who secured his first career XC2 class win on Sunday. At 16-years-old, Grant is one of only two riders who have won a pro division at such a young age, the other being Grant's older brother Stu. 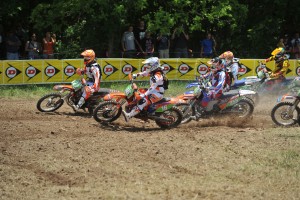 Grant Baylor secured his first career XC2 class win, making him the youngest to do so - Photo: Harlen Foley[/caption]

The day began well for DeLong, as he led the first three laps of the race, looking like a strong favorite for the race victory. DeLong eventually ran into some issues that dropped him back to eighth place and that's when Baylor capitalized. DirtWise Schools/KTM-Parts.com/Maxxis rider Jason Thomas grabbed a top five start and began plucking away his competition early in the race. Thomas even put himself into the lead on Lap 4 but the young gun Baylor maintained a consistent ride to secure his first career win in the XC2 Pro Lies division. Obermeyer Yamaha/Raines Riding University/OffroadViking.com's Jedediah Haines put in a season-best ride to secure third place in the XC2 division.


About GNCC Racing
The AMSOIL Grand National Cross Country series is America's premier off-road racing series. Founded in 1975, the 13-round championship is produced exclusively by Racer Productions. Cross-country racing is one of the most physically demanding sports in the world. The grueling three-hour GNCC races lead as many as 1,500 riders through tracks ranging in length from eight to 12 miles. With varied terrain, including hills, woods, mud, dirt, rocks and motocross sections, GNCC events are tests of both survival and speed. The series draws talent from all over the U.S., Europe, Japan, Australia and New Zealand. GNCC Racing is televised weekly on NBC Sports and RacerTVonline.com. For more information, please visit www.gnccracing.com. 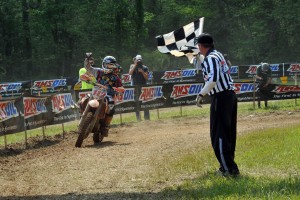 Factory FMF/KTM rider Charlie Mullins and KTM support rider Grant Baylor took the victory in both the GNCC XC1 Pro and XC2 Pro Lites class at the Dunlop Limestone 100, the sixth round of the GNCC Series.

In the XC1 Pro class, Mullins and his teammate Kailub Russell had to fight their way to the front of the pack from a bad start. Before the end of the first loop the riders had moved into the top five and shortly after that into the top three. Mullins and Russell where joined by Thad Duvall in the battle for the lead position. The three riders swapped the lead multiple times throughout the three-hour race. On the fourth lap of the race while battling with Mullins, Russell suffered a bad crash and lost a lot of time. After Russell's crash Mullins was able to pull away out front and went on to take the win.

Russell was determined to charge back from his crash and actually reeled in Thad Duvall on the final lap making up a 30 second deficit. On the last lap, Russell made the pass to secure 2nd position and joined Mullins on the podium. 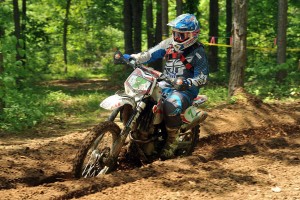 Andrew DeLong had tough luck at the Indiana GNCC, but managed to keep his championship hopes alive - Photo: Ken Hill[/caption]

The EnduroCross crowd headed overseas for another round of the International X Games Enduro X, this time in Barcelona, Spain where Cory Graffunder rode his TXC310R to a fifth-place finish. Also in action over the weekend was the Fred Andrews Racing (FAR) Husqvarna team at the Limestone GNCC. Though Andrew DeLong didn't fare quite as well, he managed to salvage a top-ten finish and keep his XC2 points chase alive.

Andrew DeLong and the FAR Husqvarna team was in action at the Indiana GNCC. DeLong was planning on starting another win streak at the sixth round of the series, and was on his way to doing so before a mechanical issue slowed him down.

"AD came around the first lap with a 10-second lead," said Fred Andrews, "and he was gaining every lap. He had nearly a one-minute lead at the halfway point, but unfortunately he started having an issue with the bike. He nursed it to an eighth-place finish, which keeps us alive in the points. This is not what we were looking for, but we will be on top of the box again."

Fortunately, another FAR Husqvarna rider, Chris Douglas, put in his best ride of the season. The Hall's Cycles-backed rider came in fifth place in the XC2 class. In the AM race, Husqvarna's Vance Earl took another solid victory in the Masters A division, extending his series points lead.