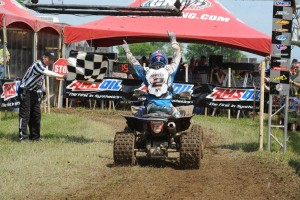 It was an exciting battle from start to finish in the two-hour Limestone GNCC as Fowler, Reliable Tool Supply/Maxxis' Chris Bithell, Maxxis-backed Borich and Lonestar Racing/Precision/ITP's Adam McGill challenged the race-win all afternoon. But it was Waynesburg Yamaha/GT Thunder's Pickens who took the early lead, grabbing his second straight $250 Team Woodhead/DeRisi Racing XC1 Holeshot Award. It wasn't long before Fowler jumped out front, with the trio of front-runners close behind.

Pickens dropped back to the sixth place position on the opening lap, just behind JB Racing/Can-Am's Jarrod McClure, who maintained a solid fifth place position all afternoon. XC1 rookie Braden Henthorn didn't get off to the best start but the Team Woodhead/DeRisi Racing rider pushed his way into the top five battle, where he eventually landed sixth place overall. 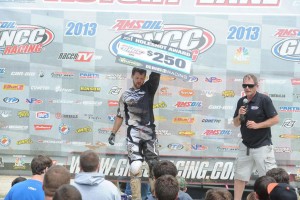 HMF/GBC/Yamaha's Johnny Gallagher latched onto Pickens early the race and the Yamaha-backed duo worked their way through the pack. Pickens held on to take seventh place overall, while Gallagher finished a close eighth. Waynesburg Yamaha's Gabe Phillips and BNR's Kevin Yoho rounded out the top ten overall for the day.

Borich continues to lead the overall standings after six rounds of racing, while Fowler sits in second place. Bithell is only 10 points behind for third and then it's McGill and Yoho rounding out the top five overall in the overall National Championship standings.

In the XC2 division, it was once again the rookie Brycen Neal who came out victorious at Saturday's Limestone 100 GNCC. Neal put himself out front early on and managed to put a comfortable gap on the rest of the field as the two-hour race wore on. Indiana's very own Fred Marley put himself in podium contention early on, going back and forth with Neal and Honda rider Nathan Wallpe around the halfway mark. Marley eventually settled into the second place position, where he bested defending XC2 champ Patrick McGuire in the finishing order. 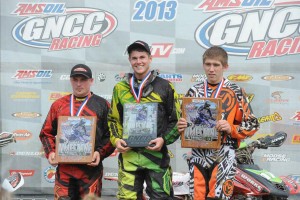 McGuire got off to a bad start but eventually worked his way into the front pack by Lap 3. McGuire was able to secure yet another podium finish for the season with a third place in the XC2 division. Neal holds the points lead over McGuire in the championship standings after six rounds of racing and rookie Landon Wolfe maintains the third place spot after failing to score points toward the championship.

Pennsylvania's Cole Richardson claimed an impressive 11th place overall to earn his first Top Amateur award of the season. Richardson topped a highly competitive College A class, in addition to scoring higher than any XC2 Pro Am finisher in the time adjusted overall.