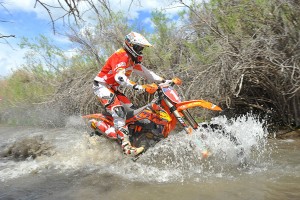 Factory FMF/KTM rider Kurt Caselli took his fifth consecutive motorsports win of the AMA National Hare & Hound Series at the seventh round held in Jericho, UT. His teammate, Ivan Ramirez, also landed on the podium with a 2nd place finish.

Caselli and Ramirez both earned great starts coming off the line inside the top three. It was Ramirez that led the way for the first two loops with Caselli trailing approximately 15 seconds behind. When the riders approached the third loop, the course became more technical as they went into the woods. Caselli excelled in this section and was able to pass Ramirez to take over the lead. Caselli went on to take the win by 2 minutes over his teammate who held on for 2nd.

"I am really happy to get another win and I am also happy to see Ivan perform so well here today. I now have a one race lead in the championship point standings and I am very excited for that. We will now head to the SCORE/Baja 500 event and I feel pretty confident that Ivan and I will do well there," stated Caselli.