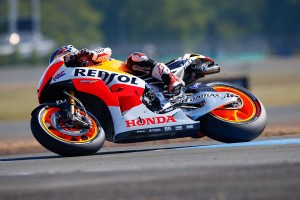 took home his second straight MotoGP win and earned the top spot in the motorsports standings in the process. The Repsol Honda rider battled through cold and wet conditions at the Le Mans circuit, slowly working his way up through the pack to earn his 24th overall victory of his career and surpass teammate Marc Marquez for the top spot in the rankings.

"I'm very happy, because I have earned an important victory," Pedrosa said. "I've been trying to win at this circuit for many years in MotoGP, and it has always been a tough track for me. Today the moment finally arrived when I least expected it, and it is immensely satisfying."

Pedrosa was followed by Cal Crutchlow, who turned in his best ever performance. Marquez claimed third place after an impressive comeback. He spent much of the race in ninth place, but began making moves with just a few laps to go. He eventually edged Andrea Dovizioso and Nicky Hayden in the final few circuits around the track.

Although Marquez lost first place in the standings to Pedrosa, he managed to stay ahead of reigning champion Jorge Lorenzo, who had a disastrous turn on the track. Despite this poor finish, Lorenzo is still comfortably in third place overall.